A Different Gatlin Baby: Children of The Corn: The Gathering (1996) 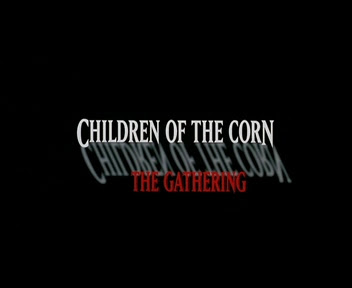 After a mildly disappointing cheap run with Urban Harvest (1995), Children of The Corn got back to its feet in a rather atypical way. 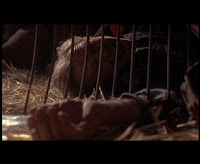 Cutting off its ties from the Gatlin babies from the first three Children of the Corn franchises, The Gathering runs a personal solo show about a strange child preacher taking over the children of a small Nebraskan town after a mass fever outbreak, putting the youngins' in a dazed state in which they adopt the names of deceased children and act rather murderously.

In the midst is one Grace Rhodes (Naomi Watts), returning to town in order to take care her stressed and phobic mother. When her sister becomes one of the Child Preacher's controlled disciples, she teams up with a wrongfully accused father to save the town's children from the preacher's corruption and stop him from wrecking havoc once again. 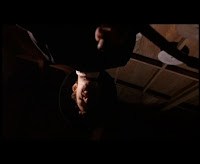 Seeing that this entry lacked any ties to the first three films save the Nebraskan cornfield location, watching The Gathering is more or less seeing a film that can stand firmly on its own by dropping the evil corn god and the religious ramblings, providing in their place a mystery-inclined angle in which our leads try figuring out a strange sickness that is supernatural by nature and getting themselves in a race against time to find and stop its source. 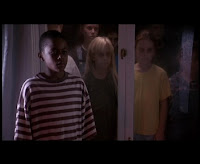 This change of narrative can be regarded as a slight drawback since we see early on ole' Josiah, this edition's preacher kid, get up from a well where he's supposed to have died and see him use his supernatural abilities to viciously dispatch an unsuspecting adult. In turn, it killed some of the possible suspense and working mystery that could have made this film more exciting as it's no surprise that the source of the disease is otherworldly thus the movie itself is running a little behind from its audience. The only surprises left to uncover are the origin of Josiah's evil, the reason for his influence and some other random crap that somehow got into the story.

Still, there is one thing I like about The Gathering, and what I believed to be its strongest point, is that it knows it's slasher film roots. (no pun) It may lack naked skin, annoying teens and a sizable kill count, but it knows and follows enough slasher tropes and cliches to make this one entry the most faithful to the subgenre and it doesn't shy away from delivering some strong gore to go along the cheesy thrills and fair scares. 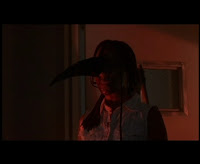 As I've mentioned before, the murders aren't that many, but it knows how to build up the anticipation and suspense to it with much of the needed blood to run. One of my faves would be that of a nasty scythe kill doing an unfortunate nurse, crucified against a door by syringes and scalpels. 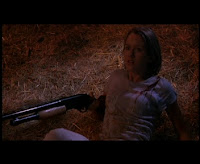 I'm not a big fan of her, but seeing Naomi Watts in one of her earlier performances, I got to admit this mildly fromage run for a usually serious themed slasher flick actually have a strong leading lady that's worth rooting for, as she knew how to take action when the time calls for it, though I find it too convenient of a scripting and direction that she easily overcame a threat that's beyond her understanding. The film also features House of 1000 Corpses' Karen Black as a distraught mother. Not much from her part; she spent most of her screen time moaning and rambling about her weird dreams and ended up getting pulled face first to a pitchfork, but it's good to see another familiar face in the fray. 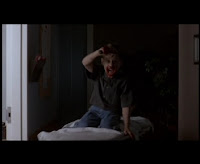 And then, there's Brandon Kleyla as Josiah, the only child preacher in the series to be the closest of being a true slasher villain as he spend less time preaching and more time doing his own killings instead of having some unseen corn spirit doing the dirty work for him. (Ya hear me, Eli? Give yer god a break!) He also had a finer origin story which mainly involves greedy traveling pastors poisoning his body so he would remain a child forever and sell out his youth. Not really deep as it sounds, but a good variation nonetheless.

All around B-movie, The Gathering got its cards right for once but will forever be remembered as the only entry that tries to make a name for itself. No corn cult, no Omen-esque good vs bad religious propaganda, just a straight faced B-slasher that brings the goods despite its cash-in by name only. No means a classic, but a good creep and gore fest all through out.