ONE LIT CANDLE! ONE ENTIRE YEAR OF BODYCOUNTS! 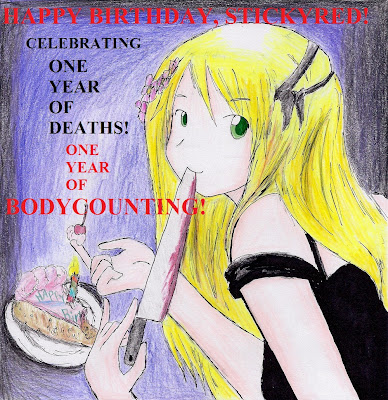 an entire year had passed and here it is, my labor of love and pass time, standing firmly on it's ground!...Or at least tries to!

SO that's a Happy Birthday to my one and only slasher blog Sticky Red!

I'm not really sure what to say now; in fact, I wasn't really expecting this site to last this long!

I guess I should do something to give you good blokes and shielas something to read in celebration for this blog's successful year of grueling deaths and masked psychos! Perhaps, an origin story?

Long ago in a distant Asian land known as the Philippines, I, Paul of a thousand names, is and still a slasher fan! Born to had seen the horrors of Michael Myers and Jason Voorhees by the cursed screen of a tellie, told of countless nightmares committed by the Springwood Slasher known as Freddy by his father and succumbs to watch the homicidal rage of the killer doll Chucky by his mother, the boy grew up a horror junkie.


Years had passed, and his interest in horror nearly died in his teen years, thinning down to no more than Hellraiser movies, Kaiju Eiga films, Phantasm series, parody comedies (mainly Police Academies, Naked Guns, and AIRPLANE!) countless zombie movies (mainly Romero), and instead focusing on his artistic drawing skills and Japanese animation.
He later rekindled his interest in horror in one faithful rainy afternoon, in a used bookstore where he found one magazine to bring back his love for horror: Horrorhound issue #12.
It was that book where he found out that most of the movies he had loved so much as a boy falls in one category, and one alone, the infamous slashers. With his blood boiling in excited rush, it all made sense that the kind of movies he loved the most was a simple routine horror that knows how to have fun, giving him the enthusiasm to sought for these movies and see if he can enjoy them. If the spark will come back.


Years had passed and Paul had collected over 400+ titles, all of it written as a list in a piece of folded copy paper. and yet, he felt empty and shallow; he can draw, he can write and his skills for criticism was put to the test when he became a college student studying Journalism, but his talents lay unnoticed and overlooked. So he sought refuge to the web, and found sites reviewing titles under this genre; generally, strongholds such as Hysteria Lives!, Vegan Voorhees and Retroslashers. Admiration, as well as the need to find and socialize with people who knows a thing or two about real movies, Paul had an idea, an experiment. And there came StickyRed, the bodycount compendium... 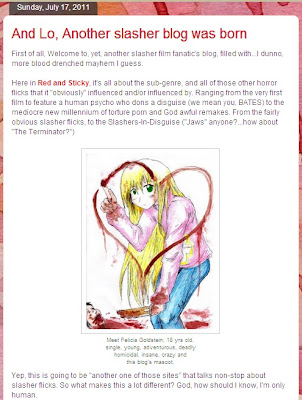 The rest was history.

So now you know how I came up with this blog. Yes, it's a boring ole' story, but I'm glad I'm running my own dark side of the internet never the less. It's nothing rewarding for most people, but I'm not most people. I'm my own freak and I love myself! And since this blog is a part of myself as well, then I love it to bits.

And of course a big love to YOU!
YES! YOU! MY DEAR READERS, WHO EVEN WENT THIS FAR TO FINISH THIS POST!

Congratulate yourself for making this round boy happy at least for this day! Please drop by anytime and see what I get to say on your most loved, and hated, slasher titles and more!

Email ThisBlogThis!Share to TwitterShare to FacebookShare to Pinterest
Labels: animation, Badly Drawn masterpieces of mine, monster, The Holidays