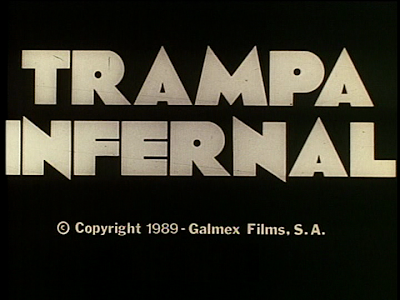 It's stupid. Very stupid. There's practically no plot whatsoever and it isn't even that scary or bloody. But why? Why can't I hate it? Was it the cheesiness? The obscurity? The foreign taste?

After a "brutal" gun-slinging showdown (Ala The Zero Boys (1986)), two competing paintball teams decide to settle their feud by hunting down a claimed hostile bear in a nearby woods. What they didn't know, however, is that the bear's the least of their worries; legend has it that a Vietnam vet had gone cuckoo some years ago and now resides in the very same woods. His name is Jesse (no, for real!) and he has a whole arsenal of bows and arrows, mines, machine guns and even Freddy Krueger's razor glove! (Mexicans sure love their Freddy) Soon, these kids will know that he's more than a legend and he's ready to hunt them down, one by one... 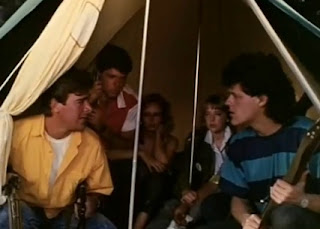 By the early nineties, the slasher sub-genre dwindled down to almost nothing. The populous wanted more than the re-runs of cliched hack and slash, thus the loosing streak of interest to all things bodycounting. Surely though, there were some underrated titles released prior to the reviving success of Wes Craven's Scream (1996) and this is one good example of them!

Trampa Infernal, or Hell's Trap, is generally routine; kids go to the woods, old coot warns them not to, old coot's warnings get ignored, build-up here, backwoods there, tells stories around a campfire, crazy old maniac shows up and make mince-meat out of them, cat and mouse antics. The only thing that's actually missing here were some nudity/sex scenes but as simplistic as it is, Trampa Infernal is efficient. The lead characters are plausible and likable enough, the movie's villain has his intimidating moments, and its short running time has a good pacing and direction that kept the movie's adrenaline running smoothly. There's rarely any dull moment and the movie's silly story is fun enough to enjoy as a simple popcorn flick. Funnier even was the killer's get-up; Jesse is a cross of Jason Voorhees, Michael Myers and Freddy Kruger, with a bit of Rambo somewhere, staying true to some fan's claim that the movie's the Mexican take on The Zero Boys (1986). He hides his face in a mask that looks like Michael's only with a dirty blonde wig and arms himself with a ginzu glove, which he uses to kill for a while until one of the cast successfully shot this hand clean off. There isn't really much character for this loonie, he's practically an everyday backwoods nut hellbent on murdering, perfectly fitting this movie's midnight B-flick feel.

The kills are an odd bunch, too; ranging from the usual slashings and stabbings to the more explosive dynamite and machine gun kills, the murders of Trampa Infernal have their light of unconventionality for a slasher movie, but I'm always up for a little change, more to say to the movie's final third act where it shifts gears and becomes some sort of action flick finale with the maniac arming himself with a machine gun and entices the hero into his lair for a final showdown. So far, I've seen a lot of movies of this kin going through the same route (Cobra (1986), Silent Rage (1982), Hot Fuzz (2007), etc.) and more often than not, I'm rarely disappointed and Trampa Infernal didn't either. 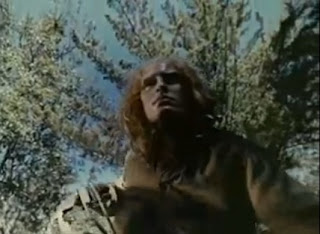 It may be cheesy, but Trampa Infernal's worth a look for those searching for rare foreign slashers. As much as it attempted to bring some originality and gratuitous gore, it lacked what some fans might like but in terms of suspense and creativity, you might be surprised at how fun a watch this one can be. So what else can I say? This movie deserves to be hunted down for keeps as one of Mexico's finest backwoods slashers!