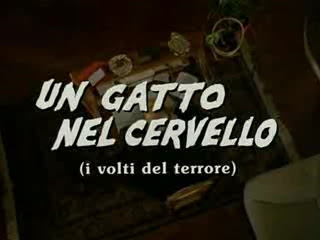 Taking place in the "real world", director Lucio Fulci's is starting to feel uneasy with all the violence and sleaze in his films, thus leading him to seek help from a neighboring shrink. However, the shrink is suffering from a bad marriage and devises a plan to use Fulci's dementia as a scapegoat while he starts a killing spree himself completely out of rage. With Fulci hypnotized into experiencing extreme hallucinations while the mad doctor starts to lop off arms and heads, the director is quick to blame himself; Will Fulci will take the fall for the real culprit? Or will the killer will get what's coming to him?

A Cat in The Brain is a tribute to Lucio Fulci's works and style, with the original pitch for the movie was just a collection of brutal mutilations and killings.

Made no more than as a visual treat, the film solely focuses on the bad and the good of his influence, playing a small satire and insight towards the horror business and its possible psychological effects on the people behind the camera. In fact, I've felt a tad nervous about Fulci here even if I am aware all of this is make-believe, since the idea of lines crossed between fantasy and reality is not far from being true, thus makes me wonder how much has he endured just to entertain his fans and the public.

Being a Fulci fan, I adore this silly run and its good nostalgic turns had me watching this out of the need of grue and grue alone; as a movie made for the gore hounds, whose life and love are dedicated to latex body parts with bright red food coloring or paint oozing out, A Cat in The Brain boasts a colorful and often out of place collection of gore, guts and grit from cannibalism to child murder, from ghostly attacks to head melting inside an oven (which is impossible, but somehow, he made it work), all of them somewhat felt befitting the flow of the story.

However, I can't deny that the movie's still just a lazy run through stock footages, no matter how hard the story tries to stand on its own ground. To be honest, the whole wrap around is a little silly and the fact that Fulci is seeing hallucinations from films he didn't direct (only produce) is even sillier. With this, it's a bit laughable seeing Fulci suddenly getting a violent vision triggered from everyday occurrences like microwaved meals, running water, a girl in a wheel chair or even just driving a car, which I guess can be a good thing for cheese fans.

Then there's the subplot of a mad doctor on the loose gutting people under the same nature of Fulci's movies; it's kinda cool but the actual execution is laughable considering his dedication to detail is surprisingly accurate. Plus there's also the off climax; not spoiling much, let's just say it ended too swiftly and lacking impact. Then again, it was originally a film with nothing more than imagery and sounds, so the addition of a script and actors may had strained the original intent of the movie.

While non-Fulci fans may find this a headcratcher, or even a demented piece of a clichéd clip show, I'm sure it'll have its fans and even be labeled as a cult fave for some. With a large bodycount and gore, A Cat in The Brain's a ninety minute stroll down to a convulsed memory lane, featuring the bloodiest and dirtiest bits of Fulcimography!