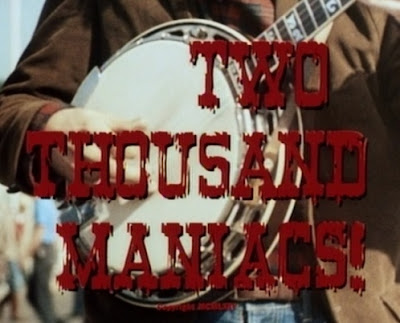 Ah, Herschell Gordon Lewis. One of the Godfathers of Gore. What more fun than to continue my orientation with the world of splatter than one of the master's own divine work? 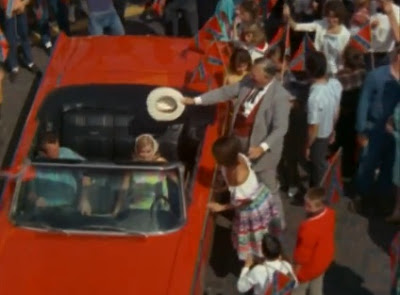 Three Yankee couples are lured into a small Deep South town of Pleasant Valley for its Centennial celebration of the day a band of renegade Union troops destroyed the town. Though reluctant all through out, the couples stay and is soon forced to participate in a series of events that's different for each tourist and each ending up with them killed. When the last couple began notice and be suspicious of the town's odd behavior, it maybe all too late to leave as an entire town of maniacs soon closes in.

As a straight-forwarded proto-slasher that bathes in gore, what's not to like about Two Thousand Maniacs! ? It has splatter, cheese and the easiest story to gulp in without the need of anything fancy such as character development and intelligent twists.  Anybody expecting the latter two would be utterly disappointed though, but perhaps they be looking in the wrong places to begin with; Lewis' films, or at least his early 60s splatter movies, always came with poor acting, monotone directing, and a whole lot of campiness to boot with its cheap effects that reflects the rushed production and minimal budgeting of this movie. 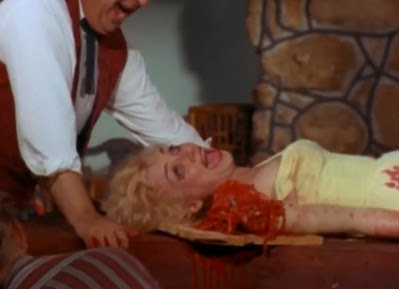 But otherwise, there's still some effort; Two Thousand Maniacs! succeeds in keeping up the pace and making every minute of the movie interesting. There are no slow scenes or any draggy moments and, pretty much despite their random nature, we can sometimes feel for the victims. Perhaps it's the sense of random dread that these folks are forced into, seeing that they're just ordinary people and total strangers to these town folks and yet, due to their war-stricken hate for yankees, the town go on with their best to make these people suffer for a crime they didn't commit personally.
There's a bit of social commentary peeping here but, thankfully, the movie didn't wallow in this too much and rather hinted it instead, the cheesy and almost comical nature of the film softening these speculations. Instead we are treated to the most bizarre methods of murder I've seen. And by "bizarre", I meant inventive! (Who knew a barrel would be such a nasty way to die if it's lined with hammered nails in the inside?) 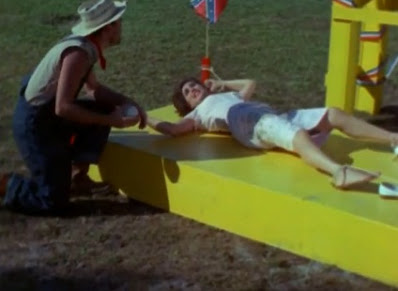 The twist in the end was kinda random, but otherwise a better explanation for the reason why these townfolks are so hostile and crazy against these "yanks". To top it off, the finale scene even pulled off a funny dialogue between two locales and their insights for their future.

Two Thousand Maniacs! would might as well be one of the finest works from the gore godfather himself. Cheap and exploitative but otherwise a fun, bloody ride for gorno fanatics everywhere who likes a bit of "class" in their splatter-love. Enjoy!

Bodycount:
1 cat had its neck crushed with noose
1 female hacked apart with an axe
1 male torn limbless by horses
1 male rolled downhill in a barrel lined with hammered nails
1 female crushed by a dropped boulder
Total: 5
Posted by Kaijinu at 5:54 PM