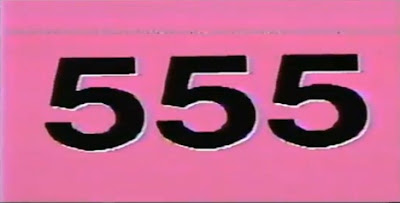 555 is about a rampaging maniac who appears every five years and kill sprees for five days, hence the title...I think. So now the killer's back and bumping off people who are apparently sexually active, and trying to solve these series of brutal murders are some everyday detectives who spend a lot of their time talking and discussing how to capture said criminal instead of, y'know, actually capturing them!

Unsurprisingly, all work word and no play makes 555 a dull boy, delivering some murders that can't even prevent us from seeing how much the budget dwindles. (I mean if you listen carefully, you can tell that's styrofoam they're stabbing.)

The thing about 555 is that it's not scary, nor suspenseful; I was expecting something more of a psychedelic-hippie-drug trip slasher in vein of The Tripper (2006), but instead 555 lags around with its micro-budget nature and often reveals itself to be no more than a cheap slasher done with a home camera and ending up unintentionally funny than what it is should be. I guess what I'm saying is that it lacks the energy and creativity as those other shot-on-video classics like Truth or Dare: A Critical Madness (1986), Thankskilling (2008) or Murder Loves Killers Too (2009), but it did try. 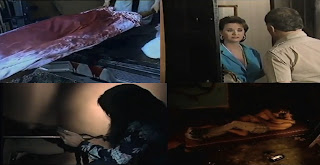 555, as cheap and dull as it is, still makes it around as a good cheese ride in a so-bad-its-good manner; the scripting and the awful acting proved to be a crazy pair and, despite its cheapness, the murders are actually good at a level. Oddly, in reverse slasher traditions, the male victims in this film tend to be killed off in a more grand fashion while the female victims are reduced to gut stabs. Probably has something to do with the killer's sexual problem. (Hence this post's title, which is by the way a really funny scene)

I'm not entirely sure what to say concerning 555's rareness. It is a rare slasher title for a lot of good reasons but seeing it does bring some pride into my collection and this blog, I'm juggling my feelings for this film. Was it a decent watch? A waste of time? And what does the extra five means anyway? 5 years, I get that. In 5 days, okay. But what of the last 5? Five couples? 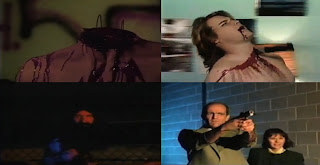 ...Wait...oh my God! Holy Deadpool-kicking-a-dead-little person! I think I finally solved the last 5 in the title!

Anywho, 555 is camp cheese delight; love it or hate it, your move, partner!