"The Most Atrocious Crime in American History": The Toolbox Murders (1978) 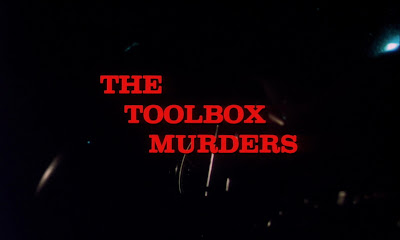 Okay, I never knew the 70s version of this movie was this bad but I have to admit, it does have its moments.

The Toolbox Murders had itself deemed infamous thanks to its depiction of graphic murders towards sexually fueled ladies residing in an apartment complex early on the film's run, just a few frames away after the weird looking opening credits. (with added first bodycount)

The killer, as the title suggests, carries around a toolbox full of various hardware appliances from a nailgun to a powerdrill, easily makes tidbits out of the scantily clad cats and does it one at a time for the next half hour or less. So early on, we get five grisly misogynist-toned murders and, in between them, us watching them girls take a shower and/or bubble bath.
The second half of the film has us going through a police-drama of sorts, wherein a sixth girl victim gets kidnapped and psychologically tortured by the killer while two of the girl's male friends do their own amateur investigation seeing that the cops aren't doing better.

Personally, the whole rating you see above comes a majority from the opening and the rest is from it's finale. The opening slaughter, which might as well be the whole movie itself, has the stalk and kill antics done with much exploitative nature and mean-spirit despite lacking much of the needed impact and tension. He ho-hums his way to the next apartment without thinking much whether his previous attacks would have alerted the neighbors, as if he is used to doing these crimes. And then at the end, he even tried to comfort his captured lass by sharing his reasons for why he's doing all this and judging from her reaction, that didn't do too well on his part.

The finale is a messy one in terms of direction but at least it goes to say, it didn't lose its maniacal energy just as the movie did in the middle where it has us tediously watching bumbling detectives trying to coin out our killer, leading to another twist in the story with an outlandish cheesy sub-plot that had me wondering if anybody would even care.
Much to the psycho-drama antics of The Toolbox Murders, it didn't fail to deliver one of the most unusual structure for a slasher film and much like on every attempt to do something different, it has its pros and cons. You can regard it as misogynistic trash, but you also can't deny its guilty pleasure deserving of a Video Nasty moniker.