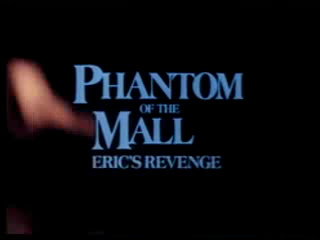 With a title like that, you can't go wrong picturing a cheap B-movie with terrible ideas and set-pieces. But, I'm here to tell you it wasn't all that: B-Movie? Yes. But terrible? No. It's far durable and bearable as a small-time flick that you can rent, download or catch in a midnight's channel surfing. Ladies and gentlemen, may I introduce The Phantom of The Mall! 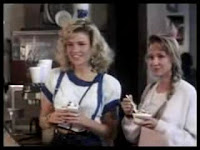 It's the grand opening of a new mall and the small town people are clamoring over it; from Ice cream stops to shoe stores, this mall already has itself two new teenage store clerks working for hard cash, one being our lead girl, Melody. Within the mall's ventilators, however, hides a disfigured figure who practices judo, steals clothes and food during closing hours and kills people who ventures near enough his turf, or dare harass Melody. This is Eric, the Phantom of The Mall, and he's plotting a big finale for the end that will ensure those who are responsible for building this mall will pay. But why exactly? Doe it has something to do with the fire that torched down his home some time ago? You know damn straight, it is. 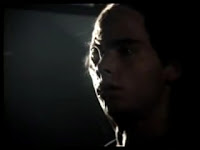 Released very late in the 80s, Phantom of The Mall could have been one tired slasher, but there's a hammy charm running for it; I'm a fan of Phantom of The Opera, may it be the stage play, the (decent) movies, that one American Manga that I'm sure is based on this play (Svetlana Chmakova? Can you hear me?), the whole kazoo; so slasher-fying this is a wet dream of two faves coming together as one. Now about the same year, the Robert Englund-starred Phantom of The Opera (1989) was released and while that's a fine class molding of a period film and a modern slasher (with sweet gore to add!) that pulled the right strings (making me a BIG fan!), Mall's own take is gladly no stale turkey.

It's one of the few titles out there to take on a shopping mall killing spree, with the added flavor of revenge and hokey romance giving it a mediocre yet entertaining snatch. It's short on logic and realism, but who cares when a guys gets bitten on the groin by a live cobra, or the fact that our killer somehow spent some time away unheard, believed to be dead, and later finds himself living in the close-quarters of the mall's ventilation system with no explanation whatever? You got to hand the film for its delicious 80s vibe to overlook all this mediocrity, thanks to a fine cast of horror/b-flick veterans such as Ken Foree (who is low on profile here as a security guard), Morgan Fairchild (who some may remember from the slasher-worthy Seduction (1982)) as the mall's conniving mayor, and Popcorn (1991)'s own Derek Rydall as the titular maniac. 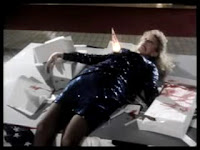 The kills are your normal, garden-variety murders, only made unique since this is one slasher who practically used the mall as a weapon itself. While most killers would arm themselves with stabby things they could find in stores, Eric here was creative enough to hang and crush necks with an escalator, sic stolen live pet cobras at targets and even using a garbage chute door for a decapitation. Basic, but favorable all the way.

So it's not really anything as big as the stage plays, or the movie adaptations that sticks with the original plotting, nor does it boast a high bodycount, but as a time-wasting good time, Phantom of The Mall (1989) is a worthy excuse. Go check it out!

Bodycount:
1 male repeatedly stabbed with screwdriver
1 male forced to a turbine, face shredded
1 male impaled on a forklift and electrocuted to a fusebox, later found with gouged eye
1 male bitten on the groin by a live cobra (!)
1 male lassoed on the neck and gets caught on an escalator, neck crushed
1 male and 1 female presumably burned to death (flashback)
1 male decapitated on chute door
1 female thrown through window and lands on a shard, impaled
1 male set ablaze with blowtorch and immolated by propane tank
1 male immolated in bomb explosion
Total: 11
Posted by Kaijinu at 9:21 PM