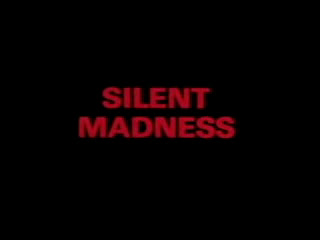 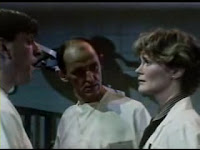 After being institutionalized for literally nailing four sorority girls at the Omega Sorority house some years ago, Howard Johns was accidentally released due to a filing error.

Now he returns to the scene of the massacre to start anew his rage-fueled killing spree. With most of the asylum doctors covering-up their mistake, the only one who's willing to stop the make killer is one Dr. Joan Gilmore, trying to convince the town folk of Barrington that history would repeat itself only to little or no avail. It's not until the mutilated teens starts to turn up all over the place that got everybody's attention, by which it may already be too late... 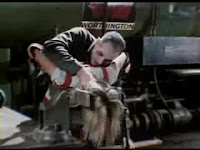 A fact about Silent Madness is that, despite it's attempt to look like a strong and solid entry to the slasher fare, it's anything but that. Removing the 3D gimmick, which hardly matter actually, it's all but the basic sorority house slasher run with characters that aren't particularly sympathetic, save Belinda Montgomery as Dr. Gilmore and Jeffrey Bringham who portrayed the sturdy and yet decent looking killer. The plot itself is dry of any ideas until it scrapes a fair shock ending and revelation that shows up a twist that no one saw coming. By managing to build upon the characters and ominously growing situation, the limping pacing did justice on creating some needed scares, if not failing to deliver the right mood and atmosphere when needed.

The final product is a tired yet watch-decent cheese fest that tried yet failed. Especially for those who like to poke fun at that cartoon axes. Still, with an impressive bodycount and a fair laughable moments, I'm sure some reader out there would try his/her crummy hands on this. I'm not going to stop them, though...

1 male sledgehammered to the face
1 female gets a (3-D) hatchet thrown at back
1 female had her head crushed in  vice
1 female scalded to death with steam
4 female shot with nailgun
1 female knifed (mostly offscreen)
1 female had her neck broken by a thrown rope attached to a dumbbell
1 male drilled through head
1 male gets a crowbar through his chest
1 male found with a knife in his chest
1 male gets a broken glass shard to the back
total: 14
Posted by Kaijinu at 3:42 PM