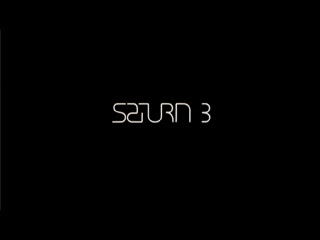 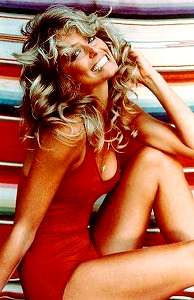 That 1976 poster of hers has some sort of importance to my childhood as one of the earliest pin-ups I ever laid eyes on and while I still yet to see more of her works, I can tell that this one had her line up as bait for the nerds. I mean scifi and sex symbol in one? That's hoarding them hormones!

But did it work? Not so much.

In the distant future, Earth is overpopulated and food supplies are developed in Saturn 3, the third moon of the planet of Saturn turned orbiting research station. In order to hasten the operations, a single ship was going to board Saturn 3 with an experimental robot made to aid the scientists working there. Prior to flight, however, a psychotic pilot named Benson (Harvey Keitel) murders the ship's captain and takea his place in assisting Saturn 3's scientists, Adam and Alex. (Douglas and Fawcett) 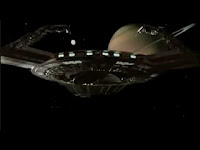 Living in complete isolation with the Edenesque nature of their work, it seems that Adam and Alex enjoys each other's company, much to the jealous rage of Benson. In order to rid one of them from the picture (as in Adam), Benson assembles the "demi-god" droid Hector, which functions by mentally linking itself with its programmer's own psyche. This, however, leads to the robot developing a disturbing lust for Alex and a maniacal rage against anybody that got in the way. It soon becomes clear that no one has full control over it. Nor do they have the strength to stop it. 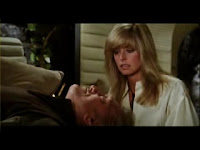 The success of the sci-fright exploitation Alien (1979) got this odd duck galloping towards the same approach by tackling themes such as isolation, claustrophobia and paranoia, a move not so uncommon for its time thanks to other Alien cash-ins such as Inseminoid. Sadly, Saturn 3's production was muddled with funding difficulties since its producer, ITC Entertainment, was also funding Raise The Titanic!, an adventure movie that was also in production alongside with the Farrah Fawcett-starring thriller, taking a good chunk out of Saturn's budget and resulting to a lot of re-writes, messy editing and a whole lot of cluster-crap concerning the movie's marketing.

Quite sad as Saturn 3's generally unique plotting tackles a rather potential psychological science fiction horror story, which it appears to be around the first half before it devolves into something more of a monster flick with a killer robot. 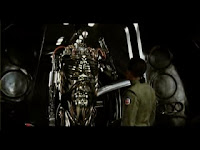 Some of it's strength did lie on the fact it's attempting to rework Alien's style as a three-man act thriller with themes of jealousy and lust, with the killer robot part definitely has it's major influence from the slasher films of those years with its sheer indestructibility and a nasty habit of stalking and-chasing its victims, though I will admit that Hector could have been scarier if it wasn't for the lanky special effects as the animatronic arms and head made it look like a discarded Disneyland set, ironic to think that it was strong enough to crush a hand off its wrist. (supposedly, Hector rips a dead scientist to bits, but the studio deems it 'distasteful". Distasteful my arse! That shit could have saved this film!) 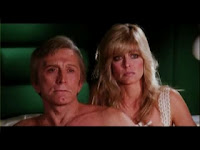 For a suspense movie with only three actors, the cast definitely have their moments but they never did fully engaged with its audience as characters: Kirk Douglas was exceptional to say the least, but Keitel, despite being the supposed most complex character among the three, could have done better in his own role as a villain as I see him being too calm and hardly doing much to spark some interest after shooting a random pilot into space. Heck, even Fawcett's a bit underused in this one, having little role around the first half and ended up as the weakest link of the bunch. 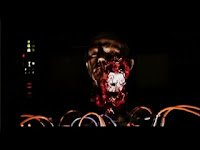 At least the film's novel tone did brought out some classy feel to the sci-fi horror sub-genre, sided by what might be some Biblical allusions here and there (Adam and Eve? Garden of Eden? Cast down from Eden after the perversion? Joys of a Catholic in a horror blog...sigh), but the result is otherwise underwhelmed by the film's low-budget look. There were hardly any real horror or thrills to entertain the audience and the supposed creeping atmosphere was beaten down by the obvious low budget of the production.

Some time around, you may get yourself wondering just how bad the producers and director of this film got it when they were handling this movie. Again, Saturn 3 has potential and it isn't really all that bad as a concept, but the execution of it all was just mishandled. Really mishandled. If you want horror in space, I suggest sticking with Alien (1979) or even Inseminoid if you are feeling trashy. And for killer robots? Nothing beats Chopping Mall or HARDWARE (1990)!

Bodycount:
1 male sucked out into space, killed
1 dog found torn in half
1 male had a hand crushed off, later found beheaded
1 male killed in detonation
total: 4
Posted by Kaijinu at 9:00 PM