BIG marketing got the wrong end of the FOOT: Clawed: The Legend of Sasquatch (2005) 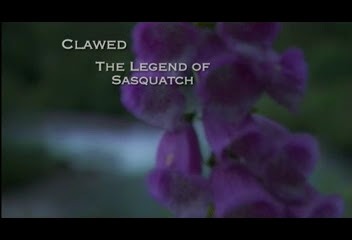 As if the opening narration of the legend of the Sasquatch wasn't enough to signify that the rest of the movie's gonna suck. Marketing this as a horror movie doesn't even cut it, it's more of Harry and the Hendersons with one shot of female nudity (for a brief second), six shots of gore and perhaps a number of times swearing. I'm thinking they're aiming this for the Cryptid guys, those fellers who took a liking in researching strange creatures. I'm up for reading about monsters, bigfoot and such, but the reason I got here was because the synopsis got the better of me, thinking this might be another Night of The Demon or Demonwarp kind of creature flick. Oh boy, was I fucked! 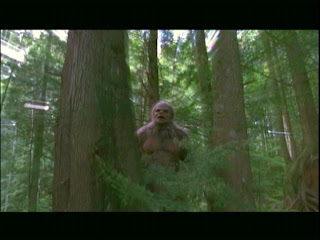 At the trenches of Echo Mountain, Pine Creek, four poachers got in the messy walk-through with a large creature. One of the survives and was "rescued' by a park ranger, who claims that the creature they encountered was more than natural. Instead of being grateful of being alive, said poacher packed up yet another party of four and they venture deep into the woods again, to hunt down whatever beast mutilated his buddies and kill that park ranger who he also believe to be responsible for it.

Meanwhile, the teenagers Rich and Jay are flunking biology, thus assigned by their professor to prepare a seminar together about species in danger of extinction; and by doing that, both boys agreed that they'll do research in the woods, tagging along Jay's girlfriend and cousin, who has a crush on Rich. They spent their night there, tell scary stories, sleep, lived. Oh wait, no, they had to run with the poachers first and be held hostage. But yeah, they lived. 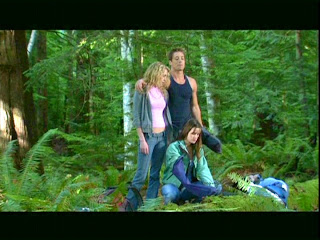 As you see, it's pretty cheap. Low on gore, low on scares, it's a green movie about how poaching is bad and how poachers are EVUL! But what was the point of it all?! i mean why market it as a horror flick?! You can do that with a friggin documentary so why go all the way trying to sell this crap as a gory horror flick? Bloody Carnage? More like Bloody Hell! Why am I even watching this? "Clawed"?! What "clawed"? There's barely any claw clawing the clawee! They scream, camera cuts away, you found them bloody at some patches (or one guy, disemboweled) but I hardly call that horrifying! Cut out the gore, nudity and change all the swearing and you got yerself a friggin PG-13 Syfy movie which is a step below their better (and their only good effort) Abominable! I mean plotwise, it's good, honestly, tear me a new one and I won't change my statement that a movie concentrating on the evils of humans rather than that of the monster is a good deal on paper, but the execution, every bloody execution is utter rubbish, mate! Cheap, silly rubbish! And did I mentioned the marketing of this sucked? Wait, I did? oh...

It's not horror. Not the Night of the Demon rip-off I was hoping for. I'm betting those with a soft spot for cryptids will probably get their fillings from this. I mean it had everything an environmentalist and animal right-activist would clamor for or at least agree (save for a headless bear), so I'm betting this is a good go for them. Those looking for a good horror film, or at least a decent monster movie with proper action, go somewhere else. I had to go to the john now, I think a need a minute to cry about the wasted hour from this...