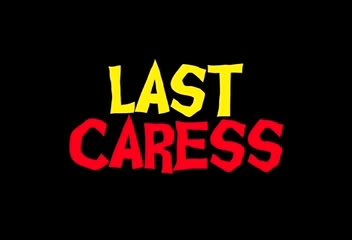 The scene begins with an artist waking up in her manor with the help of a random girl who she soon escorts out. Moments after this, the artist spots a doll hanging on a pole by its neck and, no sooner, a killer in a stocking mask and fedora hacks her chest open with a cleaver until her heart is exposed enough to cleave apart. Once the dark deed is done, the killer reveals herself as the artist's stepsister, jealous of her sibling's riches which include a painting worth millions hidden away somewhere in the manor. Now that no one's there to stop her from searching and keeping the painting for herself, she spends the next hours before dawn procrastinating with her stepsister's corpse, asking it and verbally abusing it.

As daylight finally comes, our killer decides to step outside to get some fresh air, only to be ironically reduced to a victim of yet another assassination plot; at the very front door is a man in sunglasses, armed with a spike glove which he uses to repeatedly bash the murderous stepsister's face to a pulp. As it turns out, this new killer is hired by a third party to search for the same million-worth painting and he is to murder anyone who would witness or be a hindrance to his task.

And wouldn't you know it, the artist's cousin and friends suddenly pull up to the manor for some peace, relaxation, sex and the usual séance session calling forth a suspected witch who is also a long lost ancestor. The latter proved to be too much for the gang, so much so that one of them passes out for half a day, thus leaving the rest to spend their time doing whatever they want, unaware of the lurking murderer who's out to finish the job.

Last Caress (2011) is, for the lack of better terms, a collection of plagiarized scenes from other giallo and slasher titles wrapped around a pretty standardized backwoods bodycounter jig of people enjoying themselves in a secluded forest-based location while a killer hacks them all to death one by one. The movie's very opening title, for example, is a direct redux of Mario Bava's Blood and Black Lace (1964)'s own opening, featuring the entire cast posed while the credits introduce them. The first murder even rips further into the aforementioned Bava film with the killer sporting the same disguise as the maniac from Black Lace, though the scene did try to spice things up by also copying Deep Red (1975)'s "hanged doll" calling card and Suspiria (1977)'s notorious first murder where a victim's chest gets mutilated with a cleaver until their heart gets exposed. (and then hacked as well) Other gialli scenes and elements "borrowed" include the spiked glove weapon from Death Walks at Midnight (1972) and even the "body-through-glass" shot from Tenebre (1982) among many. Slasher films would also get the copy-paste treatment as My Bloody Valentine (1981)'s shower head impaling (mixed with Intruder (1989)'s hook-jaw kill) and Friday the 13th Part 4's "corkscrew" scene (even finishing with a similar facial split!) would become some of the demises befalling on our victims.

And yet, I can't stop watching this movie. I can't stop re-watching it, too. With all the crazy sleaze and kills, I just find it hard not to find a reason or two for me to like this film. For one, I do enjoy its production quality as despite being shot in a minimal budget, Last Caress (2011) simply looks polished, with awesome gore effects and an original giallo-inspired soundtrack, as well as a lot of Argento and Bava-inspired candy-lens lighting and obscure cinematography. With a running time of 70 plus minutes, it all happens in such a quick pace, it bears little to no boring moments to speak of. It has its silly bits (girl hides under a tall table from her killer. Didn't end well obviously), some good tension and a fair amount of grit, all done with an art film feel to it. Cartoonish in a devilish way.


If you don't mind the copy-cat issues, Last Caress (2011) may easily fit to be called a slasher-giallo hybrid with the best kills in horror cinema re-enacted. If you can easily overlook the matter that it cheated on us in originality over an easy story, over-the-top gore and abundant craziness, then join the crew and give this one a swing!

Bodycount:
1 female had her chest hacked open with cleaver, heart cleaved
1 female pounded to death with a spiked glove to the face
1 female burned alive (flashback)
1 male had his face split with machete
1 female had her back impaled unto glass shards
1 male garroted and nearly decapitated with piano wire
1 female gets a hook to the jaw
1 female shot on the eye with a shotgun
1 male repeatedly clawed, throat cut
Total: 9 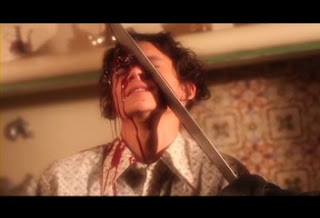 (Or, if you like, pop this disk and play "name that scene"! Winner would be the guy/gal who could name all the movies one scene is based on! At least now we have a new game to enjoy!)
Posted by Kaijinu at 10:57 PM