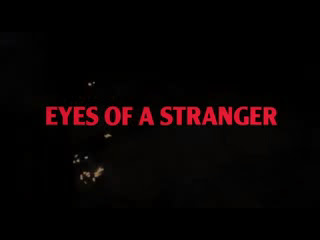 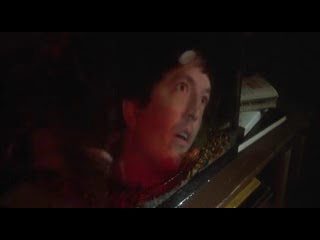 A serial rapist is stalking the nightlife of Miami, harassing women with threatening phone calls and eventually breaking into their homes to rape and murder them, and too, those that got in the way.

Soon to be caught in this is Jane, a TV reporter  who began to suspect that her neighbor might be the one behind these recent attacks. Eventually, the stalker became the stalked and he's picking up clues that will eventually lead him to Jane, who in turn continues to try and find proof of her claim. As the killer in on her, it's only a matter of time before history repeats itself for Jane. 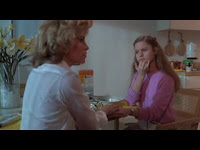 I was expecting a really bad slasher after reading about a good amount of unsatisfied reviews covering this film but, in a delightful twist of turn, I actually enjoyed this; with a small molded cheese, Eyes is an imperfect yet decent run at the 80s sleaze thanks to its big-budget look, amazingly intense camera work, and for our good friend Tom Savini, who provided the film's gore effects.

The three-act performance, however, is perhaps the very thing that made Eyes worth a look; A young Jennifer Jason Leigh plays the handicapped sister, Tracy, who eventually had one of the most grueling scenes in horror history as she unknowingly fell prey to the rapist. It's bloody tense but John DiSanti as the serial rapist John Herbert did a fine job as a natural everyday criminal. There's nothing about him that's special; no mask, no superhuman strength, there's barely a character for him to work with other than be a monster of the realistic kind, as he could be any everyday folk living on your neighborhood, suffering from a disturbing, unpredictable psychosis that makes him quite a sight as a threat. On the other hand, Lauren Tewes plays the leading lady with a vendetta against rapists. She's pretty much your basic lead, only she's more resourceful, observant and hard-willed to prove her point and save everybody else from experiencing the same fate as her sister. 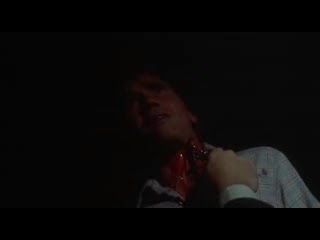 As I mentioned, though, Eyes is far from perfection; while the gore effects were good, the kills were rather tame and often occurred offscreen. We had another Savini beheading here but with less brunt as what Mrs. Voorhees had with hers. Funny though that both kills had the hand spasms but to add some wit to it, the guy's head here would later be found in a fish tank, ironic since he was previously watching Shock Waves. (a prior film made by this film's director) The rest were strangulations and a pair of neck kills, the other two only bright red kills made. Not exactly what I'm expecting from a movie with Savini's handiwork in it.

While it does had it's cheesy moments, the script's flat writing can either come up as clever or distracting, such as the killer's constant phoning being an obvious nod to Black Christmas (1975) or When a Stranger calls (1979), and the plot's eyewitness element is a certified dab from Hitchcock's Rear Window or even De Palma's Sisters. Due to this, it costs the film some of its own originality but at great length, the second act helps in overlooking this as we watch Jane go through anything to prove her point was an improbable but fun watch. Plus the last third's cat-and-mouse antics added enough thrills in making a mouse out of a poor handicapped girl. 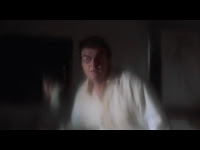 While the sleaze is present, it took a more mature look on the subject. The killer's obsession on stalking, raping and killing women may come as a bad taste but it only added the reason to root for our leads. What really got me liking this enigma of a cult classic was that, while it does have violent rapes and a high fatality rate at women, it's genuinely feminist and prowess a rather powerful and independent female leads. Tewes' character had to come in terms with her own personal demons just as Leigh's tries to overcome hers. The rapist's activity was only a repeat of their childhood trauma, and now that it came for them, they had no choice but to rely on one another and on themselves.

In the end, we had ourselves a worthy addition to the 80s run of the genre and a doozy at that. For some a mixed taste, here in StickyRed, it's definitely a keeper! Worth tracking down!