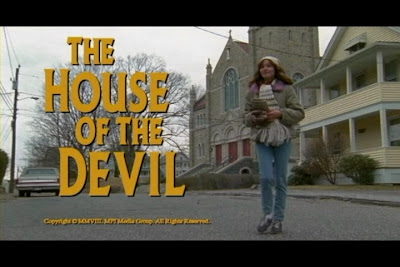 Ti West is recently a hoot when it comes to "retro-capturing" and lately managing his way into mainstream with his new ghost movie flick "The Innkeepers", here's a good look back to his little 70s/80s reminiscent Satanist horror take on a familiar backdrop. 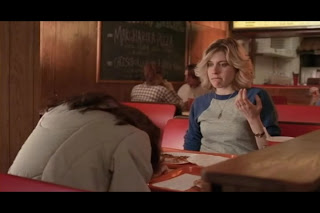 Taking place in the 80, money desperate college student Samantha Hughes answer a strange babysitting job that coincides with a full lunar eclipse. Now, accompanied with a friend to the house, she finds out that she's no sitting no baby, but an old grandmother who's apparently bedridden. Though a little waved by the deceit, she still agreed on the job and stayed to look after both the old lady and the house. By then, it's a long, draggy wait for the one hour mark before the action finally kicks in. The wait isn't as boring as some of the film ends up having; for once, we're actually stuck watching a likable and at least a clever character and at the same time, there's also a gunman on the loose and probably the same feller obscuring himself through a POV shot. So at the last 28 minutes, the film finally kicks off, and its finally live up to its title.

Now, I'm not here to give it a bad name, but I can say that the overrated raves about this film can get a tad questionable. Yes it's a retro-movie, but it has a lot to improve. The film's atmosphere is its strongest point, and one thing that actually kept it from being anywhere as boring, plus the camera work is better from the ones I've seen. It definitely got the 80s feel right, from vintage props to filming style of the usual slow-burner horrors, as well as taking a good shot again of the old 80s slasher favorite "babysitter in peril" plotline. 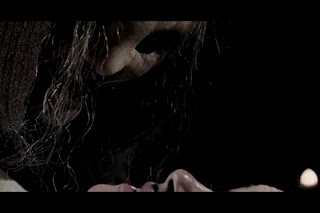 Sadly the scripting is weak, and even if Samantha doing her usual babysitter thing and the figure stalking her isn't as much of a pain to watch as one would expect, it's still no excuse to disregard some good scenes in place of that. It's another case of so-much-too-late, as the grand-guignol style finale felt too big to be just fitted in a measly half hour (note, she blacked out even, so that's a couple of minutes wasted on should have been some decent action). By then, we do have decent kills, some good looking special effects and one offbeat, ambiguous ending that sort of rings with the same tone of The Omen or even Godsend (2004), but the execution is really rushed and it hardly held the torch from all that derailed babysitter-in-peril antics. Still, something good did happened after all that waiting, to say the least.

While it is overrated, I do find the array of 80s cliches revisited here done right, even for a bit. It's far from the overcooked attempt of the likes of Porkchop (2010) and it certainly holds no cigar at being the best of the recently blooming retro-comebacks, but for a film of specific audience, the well-drawn characters, well-done details and a grueling atmosphere is enough of a reason to enjoy this number.

Bodycount:
1 female shot on the head
1 male, 1 female and 1 boy seen murdered and mutilated
1 male knife to the neck
1 female knife to the back
1 male presumably bleed to death from knife wound
total: 7
Posted by Kaijinu at 9:17 PM