Knocking on Wood and Soft Serve: They're Playing with Fire (1984) 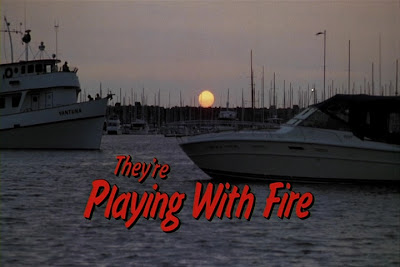 They're Playing with Fire (1984)
Rating:***
Starring: Sybil Danning, Eric Brown and Andrew Prine
A film of mixed bags and gags, They're Playing with Fire (1984) fuses Private Lessons (1980) -style erotica with campus slasher tropes, a sleazy make-out session accompanied with hack-and-slash sensibilities that did quite lost in itself around the first running hour or so. 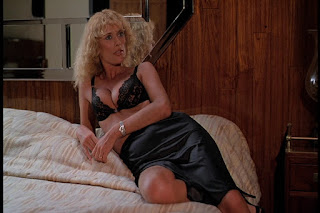 The film definitely starts off with a raunchy note as teenager Jay (Eric Brown) answers the advances of a sexy professor Diane (Sybill Danning), with promises of more exploits after he helps her and her co-worker husband, Michael (Andrew Prine), with their little plot: in order to get their hands on a family inheritance, Jay must scare two old women related to Michael into giving up their home and plunge them into a retirement village. This wasn't as easy as they thought, though, as Jay barely escaped with almost a bullet wound rounded up in his head when one of the grannies open fire.
That is until somebody else finishes the job. Someone in a balaclava and white sneakers, and have the guts to blow up a couple of old crones' heads with their own rifle. Now it could have been good news for the conspiring trio if they knew who it was, thus their trust is now tested as more people gets involved in their trappings. Could the killer be Jay's ex-girlfriend? Or Micheal in a psycho-turn? Or could it be the creepy gardener? One of Jay's friends? In this web of intrigue, who can be trusted? 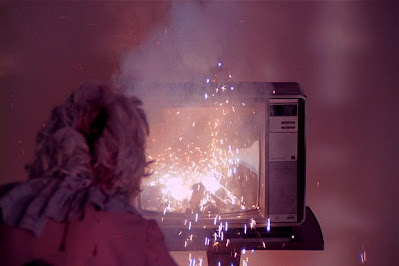 As mentioned, the slasher elements of this film got a little lost between all that cleavage and drama until it somewhat makes full force return around the last half hour. Til then, we got this murder mystery soap that has the characters trying to sort out who's who doing the killings and the only hint given is that it's someone with personal issues and talks the cooky crazy talk like Billy from Black Christmas (1976), spatting out nursery rhymes, drawing on walls, and dressing up in various suits for his murder spree. 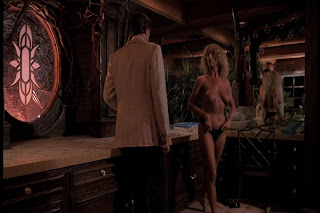 As cheesy as it is, this film certainly tries to understand it's audience, giving wide-eye cameos featuring folks like Dominick Brascia, who we all remember got the bitter axe early in Friday the 13th Part 5: A New Beginning (1985),  as well as Mortuary (1983)'s own Beth Schaffell as Jay's blackmailing ex-girlfriend. Unfortunately, the movie overlooked structure and instead went ahead to a more confused understanding of what it wants to be; one part it's a sex comedy, then shifts to a murder mystery, and then it finalizes as a slasher film.

It's bound to distaste some fans as it mostly left out the systematic teen-kill and, at the same time, their marketing may also misguide those looking for a sex romp comedy. "His English Professor is giving him a real education" is hardly a tagline that screams hack and slash, and neither does the cover art of Ms. Danning giving ole Eric Brown the footsie! But, for its efforts, it does make a surprisingly unique film for genre collectors. I mean, you can't blame them for trying to whip out something new, even if it had to come from stitched-up remnants of something old. 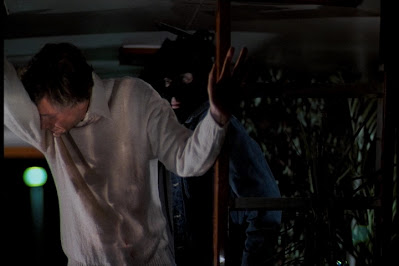 And even if its far from the slasher film I was expecting, nor is it the brand of titillation meant to excite me, They're Playing with Fire's yet to disappointment. It's slowly building up as a cult gem of sorts and it does call for uniqueness despite it's identity crisis. In case you're the adventurous movie buff (that or you love Ms. Danning's breasts), then this is your slice of pie.