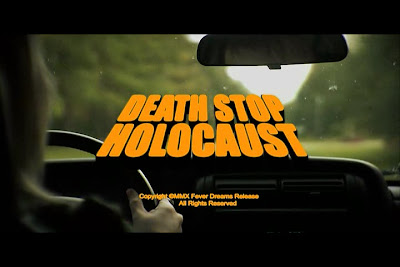 This was my first Justin Russell movie and one of the two of his masterpieces I own. His 80s slasher homage The Sleeper may be a fun blood-stained throwback, it is nothing compared to this creepy feature that's no cold turkey when it comes to fear building in the vein of 70s drive-in exploitations and a dash of Italian underground cult.

Elizabeth and Taylor were on a trip to visit Elizabeth's father's summer house located at a small island for a vacation when, upon arriving in said island, they come across a white van that appears to be stalking them. As night falls, the girls realize that they have become the unwilling targets of a trio of masked men who wish nothing but to torment and murder them. When the men managed to kill her friend, Elizabeth has no choice but to try and survive these attacks as the locales fail to aid her. 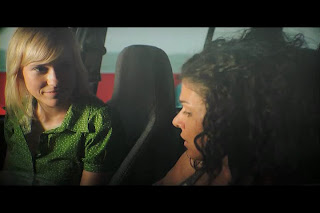 Reminiscent of 70s grindhouse, Death Stop Holocaust is an evenly paced and very dark movie that burrows deeply into one's psyche; it has no plot other than that it is a survival movie featuring villains that have no redeeming explanation as to who they are and they're terrorizing the girls. The only fact made, or at least hinted was that they're being protected and feared by the townsfolk for God-know-what reason and they're very freaky looking. (One wears a sack face mask, the other wears a bloody horse mask (still unnerves me), and the last did a better job donning a pig mask than SAW's Pigface accomplices!)

The movie is all about tension and creepiness; the slow pacing of the first half draws attention to the girl's lives with much realism thanks to a workable portrayal and scripting, making them a sympathetic target for us to root for by the time night falls and the real horror kicks in. By then, it's one scene of chase-and-stalk to the next as the silent killers taunt them into fleeing and fighting back, a trait that I see as mean-spirited and sheer horrifying with a tone of hopelessness being played here and there. Same can be said with its bleak ending that comes very distressing for me, bound to disappoint those who're looking for a typical "bittersweet ending".

On the technical note, I do have some issues with uneven audio; sometimes you really got to pump up the volume to understand what some of the characters were saying at the first half, a singular drawback that I can forgive since the second half concentrates more on the stalkings and contains very little dialogue. Gore effects were great and handled pretty well. (save for a disemboweling scene) Same could be said for its synthesizer score and a natural backdrop capturing the location with even cinematography.

Lisa Kreninsky and Jenna Fournier played the two leading ladies quite favorably; they're still easy on the eyes and know how to deliver their roles fairly, although Jenna's character did got killed a little too soon and Kreninsky spent most of the latter half screaming. The three main villains got nothing more to say about themselves since they are, well, themselves. With zero lines and a lot of body messages, they're standard killers who're realistically and graphically remorseless enough to be scary.

It's far from perfection, but any weaknesses it holds can be easily overlooked. Far from the camp-cheese, bitter-sweet endings take on Hollywood's slasher films, Death Stop Holocaust will emotionally drain you.