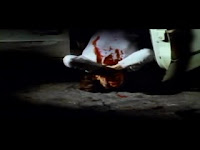 In a short running time of  74 minutes, this low-brow garbage of a proto-slasher have two fat cops going through night after night solving a string of murders involving teenagers at a local drive-in. The victims are stabbed, decapitated and impaled with a samurai sword, with no witnesses to question. How can these two cops solve a murder with no leads? Hell, shouldn't care much cuz this movie is DRAGGY. 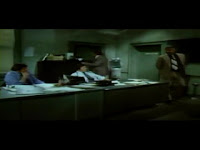 Gore is good, to say the least. I see a lot of forerunner kills here and that includes the oh-so-popular couple skewering whilst copulating. Yet, in sense of scripting and execution, the film lags around with at least half a dozen scenes that have characters talk non-stop up until the finale that's so silly, it's utterly lame. I mean, apart from the killings, we have long shots of people making-out, POV shots of some guy at a carnival and a God-awful warehouse scene. It's badly acted, badly lit and the sounds are mucky as it is, you hardly know what's going on.

This is perhaps the shortest review I've written here, but a short running movie deserves a straight opinion. I'm not sure whether it's intentionally funny or that the camp value of this film was higher than God buddy Himself, but whatever the rest of the world will make of this, keep me out of it. Sorry, mates. Gonna trash this.

(P.S. heard this film's gonna get a re-imagining and apparently a blogger friend of mine's one of the special mentions. Well, it's about time someone improves this garbage...)
Posted by Kaijinu at 3:07 PM