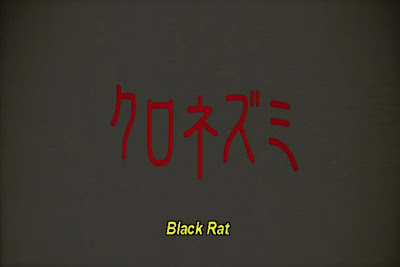 Asuka was a cheerful girl who didn't let anything get her down and tried to lift up the spirits of everybody she's befriends, even if they don't return her kindness. However she committed suicide one day, jumping off a building while practicing a dance for a festival.

Months passed and the six teens who "befriended" Asuka receives a text message from her, asking them to go to their classroom at midnight. There, they met up with a girl in a grotesque rat mask who made it clear she's going to murder them in revenge. Has Asuka returned from the grave? Or is it someone with a bloody grudge?

In a nutshell, Black Rat is as easy as any slasher film would get;.if you are familiar with the sub-genre, you can tell most of the cliches before they appear on the screen from masked killers to some fairly intense stalk-and-kill scenes though kills are tame as they are barely bloody and cuts away before we could even see it happen.

To elevate the plot and its lack of bloodletting however, the film featured a rather cool and cute looking masked slasher that tried to do some SAW-style trappings on her victims where they have to win a game to be set free. Thing was, these are nothing torturous. Just silly challenges such as blocking a soccer ball or getting 100 points in karaoke. I find this workable as it did well around the considerably low-budget but it did made some of the tone rather rocky since the direction appears to be aiming for a serious approach.

Thankfully, the entire film played out as straight as possible; in typical J-Horror element, the reason why these teens are in this kaput is told via flashbacks which reveal to us bits and pieces of what had happened months ago and who was to blame. This also worked well, although it's nothing shocking as it is; we can tell it is for revenge, so the only mystery left for us to ponder about was whether it is Asuka killing them or somebody else, and Black Rat did attempt its own set of twists to sway us off but they're nothing too outlandish.


I can easily say this won't be anything big but if you managed to grab hold of a copy, it's a fair viewing from time to time. Not gonna win any big fans but at least worth a look.