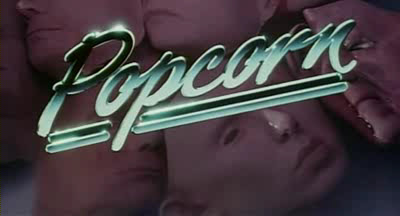 Fifteen years ago, director and producer Lanyard Gates finished a film called The Possessor, which was almost lost in a fire that engulfed the theater where it was being screened. Gate's body was never found and the movie remained lost.

Maggie (The Stepfather's Jill Schoelen) attends a film school where she, her classmates and professor decided to do a B-Movie Horrorthon as a project, featuring films that used gimmicks like 3D props, Shock-o-rama and Odor-Vision. The movie marathon will be held in, by luck, the same theatre Gates worked at during his filming of The Possessor. It's a college project they all can enjoy until a horribly burnt figure starts to take the identity of Maggie's friends and killing them one by one. Could it be that Gates escaped his southern fried fate and now has returned with a vengeance?

With plot holes everywhere and a low (actual) bodycount, Popcorn should have been a disastrous movie. Its box office bombed, resulting to the movie ending up getting tossed from one discount theatre to the next, barely making any recognition. Still, for some of us slasher fans, we see something else that we learned to like and appreciate.

For starters, Popcorn knew how to handle its characters as, while being a horror film, you can tell there's a lighthearted feel to them to the point they are chummy despite a few animosities in between, making them such a strong and likable cast. Though the individual characterizations might be weak per se (and so might be some the actor's performances), they're the tolerable corniness that reminisces of the 80s stereotype, making Popcorn a film that sparks nostalgia for the sub-genre's golden decade. Other lighthearted moments include an 80s inspired montage of our gang happily preparing the theater, a reggae band that plays a bad yet catchy pop song during a momentary black out and, as of the B-Movie element, snippets of 50s B-movies played from time to time!

Next, the story; it may be bombarded with holes but there's enough thrills, eerie moments and an estranged situations to keep a fan glued to the screen. Some references to the Italian Gialli are used such as black gloves, mannequins to distract victims, the fancy colored lighting and trippy imagery. The kills, while indeed are little in count and very tame, built some fair tension and are often memorable for their bizarre nature. Where else can you find death-by-poisoned stink bomb? Or a man impaled on a giant mosquito prop?

The climax also features a clever twist on the identity of the killer and their connection to the Gates' fire incident, giving the villain a personality and a motive that is similar to Wes Craven's Scream. The killer's habit of putting face masks may not sound like a new idea, but Popcorn's has a neat twist to it; instead of a mask of pure flesh or paper-mache, our killer creates a realistic latex that resemble Maggie's friends and uses them to lure their victims. While no Scooby-Doo style unmasking happened here, we did got a good look on the killer's real face and it ain't pretty!

Lastly, and perhaps Popcorn's strongest point, was that it took us for a good stroll back further into memory lane with the snazzy gimmicks used to promote or made to make a film from the 50s unique and fun. Popcorn is kinda like that, a gimmick that shows off its love letter approach to those decades of dangling skeletons, multiple endings and electro-buzzers on seats, when you could have fun and be your greasy, horror obsessed self. Even with it's modest budget, you got to hand it to the movie's resourcefulness for props (That Shock-Clock. I want one, now!) to give it a big-budget look.

A few years before the witty, self-satire of Scream, Popcorn made a good run at that and, while flawed, still managed to be entertaining. It may suffer from the 90s disease of tame kills and teenage angst, but it's enthusiastic plotting, solid cast, and a homage to the 50s horror era, you can't go wrong with a viewing of this cult classic.