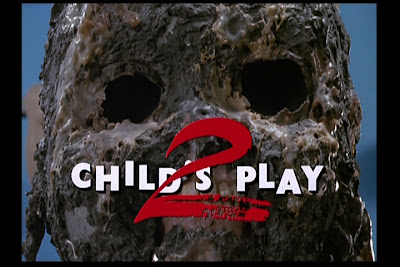 Fending off bad publicity, the manufacturers of the Good Guy Dolls, Play Pal Corporation, tries to build another doll from none other than the marshmallow-burnt head of one previously possessed by Charles Lee Ray. Why make a new doll with that burnt piece of plastic (which may as well be evidence for a ruthless series of murders, mind you) is beyond me, but watching them build back a Good Guy doll with much detail did proved to be entertaining.

Now it's been time since the events of the First Child's Play flick; Andy Barclay is put to a foster home as his mum gets institutionalized and he's having a hard time adjusting as it is. Still, everything's gonna be okay, right? No more killer dolls out to steal yer body?
Tough Luck! Just as these toy geniuses were about to plunge the doll's eyes, a surge of freak electricity caused a ruckus that took the life of one worker. Sad to say, the head of the Play Pal Corporation was there watching and a little pissed off of what just happened. Nevertheless, the doll production is still good to go, but little junk on their table caused enough bad publicity and the head wants it thrown away. Of course, Charles' back and finds himself in a race against time as, you may already know, the longer he stays in that plastic body, the faster he'll become human in it. So after tracking down Andy's new home and killing the owner of a fancy car that escorted him there, Chucky and Andy got reunited. For the worse.

Now trapped in a house with a homicidal possessed doll, Andy's left to defend himself now as Chucky stalk and chases him wherever he goes. But when he's to blame for the murders and Chucky's getting more and more desperate to steal the boy's body, can Andy really save himself from this Good Guy gone bad?

The first Child's Play was definitely an attempt to spark a new life to the dying Slasher sub-genre. The late 80s was considered by many as the toughest time for films of such grue and cliches as the familiarity's overdone and any joe with a camera can point and shoot thanks to the rising number of video markets. Yet, it did brought back some good moola thanks to the refined special effects to top it, as well as some creative dimensions that deemed thrilling. When MGM chickened out and sold the rights of the film to Universals, a sequel was green-lit and made at the beginning of the new decade, thus making this film in a dire position as a marketed slasher movie.

Child's Play 2's identity as a continuation of the first has it's strengths and weaknesses though, ideally, the premise of the film caused some criticisms on how weak it is on it's own. The whole movie really had nothing more to add from the complexities of the first. The scares, tension and mystique of the original was notably missing and instead this sequel took a jab to a more basic and practically overdone slasher plot. Sad to say, the film fell right into the more obscure sequels, or least to say, a pretty standard entry to follow-up a successful predecessor. Yet, it does make a good deal on its own despite the familiar trappings.

While nowhere as good as the first, Child's Play 2 still looks decent as a popcorn movie. Chucky is no longer a mystery monster, but a full-out slasher villain packed with wise-cracks and the resourcefulness; this either comes as a step down for some, but for those who're yearning to see Chucky in full action have their prayers answered with this movie. Young Alex Vincent also deserves a recognition for his reprised role as Andy Barclay. By making him the main lead this time, we saw more to Andy than just a frightened young boy as he comes troubled by the unusual turn of events to his life, yet adjusting as it is. Also coming in is Christine Elise as Kyle, this film's estranged final girl as, ironic to think that the only one capable of saving our hero happens to be everything a Final Girl shouldn't be; she smokes, she's a rebel, and looks like someone who would likely start a fight. She didn't do much except look badass during the first half, but  then she suddenly gears up into a spunky, hardened gal who's out to save her little foster bro. Not the old fashioned way, but otherwise a welcome break from routine.

Note, too, this film's better set-pieces. The school murder was a nice piece of action with a satisfying end to it, with an unlucky teacher meeting a ironic demise with a meter stick, a death that even makes me a proud Catholic (insert troll face here), however this has nothing to top the Good Guy doll factory setting at the near end. Maze-like and colossal, the factory was once described as fun yet disturbing by a critique and I couldn't agree more since the setting created such atmosphere for the hunt ala cat and mouse. Clearly, a kid's visit to toyland may not be that exciting when you have a killer doll with a torn-off hand and a blade replacing it ala Ash and his chainsaw in Evil Dead 2, going ape after said kid. Or when tools made to make them toys are used a murder weapons. Child's Play 2 definitely won me over (and so does many others) for this imaginative climax. Plus, that hot wax kill  got engraved on my psyche ever since I saw this film as a kid! That's Bonus points for childhood approval!

May not be the winning sequel, Child's Play 2 is still a likable bunch despite it's lack of true originality. It is a lot better than the next sequel, but in no competition to the superior (and funny) last two entries in this franchise. For its time, Child's Play 2 might as well be the movie to talk about among its generation's horror fans but looking at it now, it's a slasher film unjustly criticized on a year of thrillers with big-shot stars and budget, with devilish kills and an equally devilish villain, now slowly rising to horror stardom.