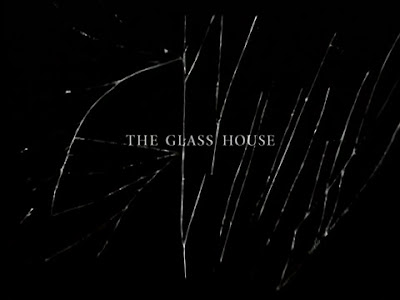 The 90's self-aware status brought a new barrage of thriller films that had yuppies defending their turf from psychos. Often a time, these psychos hold their victims in a singular ground, forcing them to take drastic actions to either escape or fight back, a reverse roleplay with the usual 80s stalk and slash, but the influence is still present. From the likes of films like Misery, Cape Fear (1991) or even Mother's Boys, The Glass House was a moderately fair addition to these high class thrill chases, if it not a bit too familiar for its own good, I'm still impressed with what I just saw. 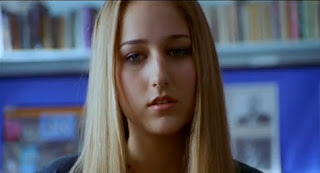 It follows the newly orphaned Sixteen-year-old Ruby (Leelee Sobieski) and eleven-year-old Rhett (Trevor Morgan), who had lost their parents in a car accident, moving to their aunt and uncle's residence in malibu. Their new guardians, Erin (Lane) and Terry (Skarsgård) Glass, lived in a glass house overlooking the seaside, and provided the them with enough good food and personal entertainment, but much to Ruby's taste, there's still something wrong with this picture. Though she attends a local highschool, she's still not educated properly, Rhett's given too much freedom as he spends all day playing video games, Erin is often seen injecting herself with a chemical claimed to sustain her diabetes and Terry tries to advance on her once when they were alone.

Ruby tries to set her concerns over their trust fund lawyer, but often leads to no avail. In due time, things goes for the suspicious and even deadly; loan sharks began to threaten Terry in his work place and at home, and after doing a research of her own, Ruby found out that he might be after their parent's million dollar trust funds and may as well be responsible for their parent's death. As tension rises, The Glass began to take drastic measures to tie all lose ends; the money they owe, the meddling children with all that insurance, it all seems clear to everyone that they can end it with one simple choice: murder. 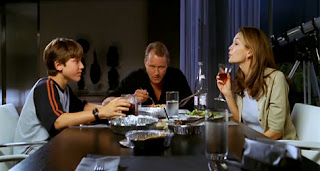 The Glass House is all about deceit and development from said deceit. While it plays around as a basic thriller, it's all about star-power to bring some new spark in a story that felt a little familiar with  films like The Stepfather or even a certain psuedo-slasher film Scream For Help. While Diane Lane's character asked for sympathy despite her terrible actions, it's really Stellan's character that gave the chills. He played his role effectively as an estranged yet troubled villain, providing new depths as both the victim and the monster. Leelee Sobieski had an authentic look to her and she was casted very well for the part. She has that overall vibe that appeals as a teenager going through the changes of her life, only her's had gone a farther end as it complicates along with the mystery involving her foster parent's unusual behavior.

The script is surely a basic run through the pages kind of plot. It's laden with plot holes, but can be easily dismissed with the movie's fresh take on the villains. Comparing it with similarly themed horror flicks where evil family members come off as homicidal foes, they often do the first move as of any villains who tries their best to bring out the fear by imposing themselves as cold and dangerous; in here, the villains were calm, troubled and did their best to hide their true intentions, only it doesn't go too well for them when Ruby began to overhear their conversations or began to investigate her parents' deaths. The victims had sparked the problem themselves, yet it was inevitable since it will come to them no sooner as they're left vulnerable. Another possible misfire would be that the opening act ended too soon; it barely got us enough time to know our two leads better, drawing a saddled flow that only focuses on one single heroine and the lack of focus on any other plot points.

The direction is solid, yet it does had you feeling that you'd seen all of this before. The premise is imaginative, bundling enough suspenseful moments for any thrill seeker to enjoy but more could have been done to improvised it. Wouldn't call it overused, hardly the point, just had its tidbits of familiar groundings that rises no surprise. Better than your usual thriller, but no way I'm gonna lose some sleep over it.