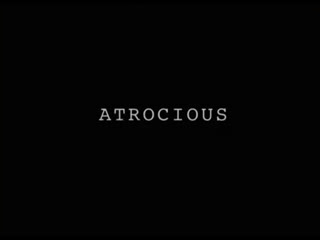 The main problem about found-footage horror is that it starts and ends all alike. The only exception to this rule so far was The Tunnel, and too, the hoddgepodge backwoods horror Evidence, as while they start like any found footage horror, they were creative enough to end it in a dramatic manner and provide some of the better tension and enigma than most of the horror sub-sub-genre can offer. Atrocious may had been better at that with its short running time, I was expecting they would had done something far favorable for its time; unfortunately, they failed to live-up anything better than yet another "Blair Witch Project" style of scares and creepiness, though a watchable result at least.

A brother and sister visits a farm house in the secluded woods, hoping to investigate the Legend of the Girl in the Garraf woods. The house sports a gothic build and a maze at the back, no sooner at the moment they arrived, the siblings starts to record their investigation. By next days, weird things began to come around; family dog goes missing, strange figures glimpsed at the maze, as night falls, they all fell prey to something atrocious.

Honestly speaking, the film's realistically scary. The way it presents itself really felt like someone who's holding a camera for the first time, and it did had its decent scares and even some gory moments. At first, you may got yourself believing this is going to be something supernatural, but I am glad they made a twist that fits my taste. Thanks to this plot shift, we suddenly had a burnt body of a child, stalk and chase with an unseen assailant, and one of the nastiest villains that suddenly pop up in a surprise ending.

The only flaw here, and the most complained, is that, for a film of minimal run, it got lost in itself with all that POV walk-throughs and spents half an hour with the POV shot of a guy swearing below a whisper, while walking around in that damn maze. As distressing and tension building as it is, it's frankly boring and a bit repetitive; hardly anything came up from it as the real thrills and scares happened at the farm house, meaning the we'd just wasted some decent running time for nothing. (well, almost nothing, we did find his sister chained to a gazebo, if that means anything for you...) Normally in parts like these, this would have been where most of the scares or action come up, but in attempt to break this build, Atrocious risked giving up predictability over originality, but failed to came up with anything better.
Not really saying this is a bad movie, just lacks any proper ideas that would had lifted this film even higher than what it did already. The shakiness the films of this kind are known for maybe overdone, but it did had its shining glories later on. It's a test of patience, or at least wit; you could always fast-forward it. Take my word for it, there's nothing in that maze! Nothing. I'm still glad I gave this one a chance, but I can tell this one's going to the half-right matters that makes up the mediocre and the plain.