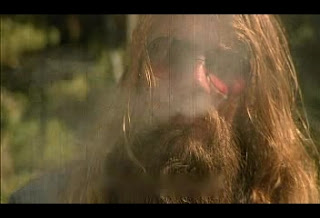 The Impalers. If you're looking for the nastiest bikers in history, this is them.

They are one rouge biker gang of five whose love for murder and rape had gone beyond the four borders of acceptance, going as far as murdering a van load of priests and nuns early on in the movie, a crime too much even for a rival biker gang, Satan's Own. But showing that they hold no care on what other peeps think, they massacred an entire bar under proprieties by said rival gang,and now is on a road trip to hell as they continue their massacre to the deepest parts of the South Georgia woods.

In there, they invaded the home of an anthropologist and his autistic daughter (or so he claims), who is having a casual visit with a colleague and his pregnant wife, and all things unspeakable happened. However, this is only the icing of the cake as somewhere outside the cabin is a creature hungry for flesh and its not going to wait for its dinner to come out of hiding. But what's this got to say to The Impalers? What is this monster? And who will survive this one night of mayhem?

Dear God No! is definitely not your friendly grindhouse movie (as if there's such a thing). In vein of the nastiest number of splatter movies and 70s nihilistic tone, Dear God No! is a drive-in feel-flick that tramples on one taboo to the next, with much amateurish gore and craziness to enjoy or hate.

From beginning to end, the whole movie is cheesily acted with very little character to root for, making it a test of patience with all of the nasties the hooligans put their victims through, but there's no denying the film's taste on practical effects and editing is fun to notice. What it lacked on solid story-telling, made-up with nasty numbers of child murder, old people murder, cop murder, nun murders, necrophilia, drug use, home invasion, nazis, biker mayhem, preggie rapes and murders, abortion, bigfoot kills, etc. It's so absurd that it's hard not to enjoy it as a silly white trash pile of offensive gore shots to the next, and let me tell you, there is plenty. Nearly the whole movie felt like a cheaper yet pumped-up version of the carnage The Devil's Rejects had pulled off, but in the last few minutes, where the monster arrives, it swapped off the biker-horror and tapped in Bigfoot slashers in vein of Night of The Demon and even the multi-hybrid Demonwarp, with our furry friend showing off gut pulling, disembowelment, and a nice mouth mutilation to give this guys their just desserts.

A good look back, of sorts, on everything that had made exploitation deserving of its title. It exploits everything with much grit and gore, a monster-sized titty and body count and no-names with questionable acting. You won't find gloss and money here, just plain low-budget camera works, latex bodies and excruciating tension only found in movies of this nature.

So is Dear God No! a good movie? In a sense, it's not. It's damn evil, bad taste in every corner and meaningless violence and taboos all through the way. But you know what? I don't care. I'm up for any silly monstrosity that comes in my way so long as I can have fun watching it! Violent as it may, there's nothing like it either and it holds its bar high enough to go beyond the acceptable and the tame. What the heck, go see it if you don't believe me, but be warned. There are no due-overs and the contents may tend to scar. Deeply scar!