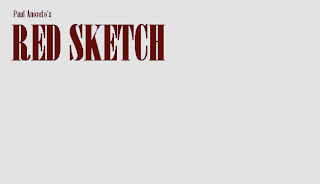 It is my honor to present to you a collaborative work by yours truly with some very talented artists and animators out there who helped me with this. I now present to you my first feature, Red Sketch.

Starring this blog's own mascot, Felicia Goldstein, a serial killing beauty in a scummy city, murdering anybody that just happens to be in the way. In her journey through this urban jungle, however, she befriends a very young thieving girl named Mary, who lives on her own in an abandoned house, stealing for both to survive and have a little fun. Though a bit uneasy with the girl's habits, Felicia found an easy closeness to Mary seeing that they're both living a life of sin, but keeps her best to try to cover up her own murderous personality.

Eventually, Felicia is basically living with Mary, doing as much as even cleaning the house for her, much to her friend's dismay. Nevertheless, the thief still let Felicia stay and they both look after one another.

As time passes, Felicia learns that Mary's the daughter of a crime boss who was murdered by his own associates after they got too greedy. Said associates agreed not to harm Mary and leave her alone, so long as she could pay them through any means necessary. Knowing she's not hardened enough to kill them, she relied on petty thievery to keep the money going, but the more she pays, the more they ask from her. Soon Mary began prostituting herself and staging robberies that nearly got herself killed. Seeing that the child was suffering, Felicia decided to help her the only way she can.

Two other killers were called, friends of Felicia; a hulking man only known as The Bagman, and Ryoko, a masked girl who shares the same wickedness as of Felicia. Together, the three onslaughts an entire gang house, unknowingly leaving one member alive.

Seeking revenge, the surviving thug shambles his way to Mary's home and brutally rapes her and killing her at the process. The moment Felicia gets home the next day and saw the fate of her friend, all hell broke loose and vengeance came into mind as she held the remaining member's family hostage and had him come in to face his crime one last time, and end all this madness once and for all.

Done entirely in red and black whiteboard markers, with the running time of an hour, Red Sketch is an experimental animation with a simplistic yet gory exploitation plotting. It taken its cues from classics such as Last House on the Left and the Hong Kong slasher Dream Home, wandering in the same grim nature of Maniac, and an enormous bodycount that would have make Jason Voorhees proud.

While it does fell short on dialogue, the film holds a rather grim, fairy-tale like narration by me in place of character vocals, keeping the film's mood as sullen and serious as possible. But since this is my debut film, there's bound to be short comings, so please accept my humble apology for any mistakes. Though, I cannot thank my animators enough for helping me out in this; they tried their best to keep it all detailed as possible, while at the same time, holding no bars on the gore.

Red Sketch is my love letter to slasher films and to this site, so you know what to expect with its cliches, but we did try our best to break the streak to come up with something new. Still, I do hope to have a minute (or an hour) of your time to watch this, so please enjoy if you dare, and thank you!

Bodycount:
1 male had his jaw beaten off with baseball bat
1 female had her head smashed through microwave and got her neck impaled on a shard, head combusts after "baked"
1 male had his head sliced in half with thin wire
1 female had her head beaten to a pulp with wine bottle
1 female gets a sword through chest
1 male stabbed on the ear with buck knife (flashback)
1 male hacked to death with axe (flashback)
1 female drowned in tub (flashback)
1 male and his neck broken
1 male gets a gun forced down his throat and shot
1 male wrapped in barbwire attached to a car and crushed
1 female gets a vacuum cleaner shoved down her throat and choked
1 boy fell off a window
1 male gets a road flare shoved into his eye socket
1 elderly male indulged lye, throat eaten
1 female had her head baked in oven
1 female found strangled with her own guts
1 female gets garden shears through head
1 female broken in half against killer's knee
1 male gets a machete through arse and exits to groin while copulating
1 female stabbed on the groin by same machete while copulating, hacked to death
1 male found with CDs stuffed into his mouth
1 male had his mouth ripped open
A number of individuals caught in a fire
1 male shot
1 male shot on the head
1 male gets shears to the eye
1 male impaled on a rifle
1 male shot with rifle
1 female thrown through window and falls to her death
1 male beaten to death with rifle butt
1 male shot
1 girl raped, killed
1 male burned alive
total: 29 +