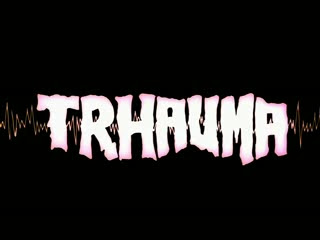 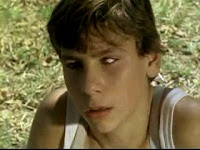 An awfully rare Italian take on a slasher movie in the 80s, Trhauma is an overlooked hybriding of giallo subtexts and slasher film bodycounting. It opens with one boy coaxes another who appears to be born with a blind eye, to climb a tree. But when he poor lad fell on his back, apparently dead, the other left him for dead with a cold remark. 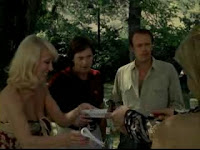 Years later, we now join a group of invited his friends in a vacation house in the woods. When one of the female guests fell victim to a disfigured killer, who rapes her post mortem. When she failed to return later, her friends began to worry, but by the time they realized something's way off out of the ordinary, it could be too late, as the crazed killer brandishes a billhook, and continues his spree. But could there be somebody else pulling the strings? Some one paying the killer with legos?(!) 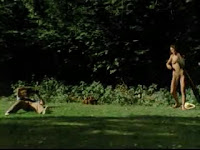 Trhauma, as rare as it is, lacks any fresh ideas as a giallo; the occassional guilt trip is still present, so is the red herrings and twists. But, it does try to add a new take on the cycle, adding in the slasher panache as the early 80s is pretty much the dying years of the Gialli. Though majority of the running time had us wondering who could it be that's bargaining the killer to murder, as each characters has their own personal issues with each other; some argues forbidden love trysts, while others are into blackmail, which makes pretty much anybody in this film is a suspect for an accomplice, there is still a psycho killer out there hacking up people with his billhook. Now, normally, this is a basic pattern for any backwoods slasher movie, but what makes Trhauma a bit off is it's sluggish pacing despite it's 70 minute running time, its lack of interesting characters, overly misogynistic tone and it's inability to shock us. 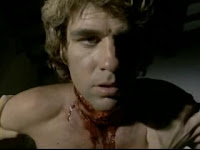 Gore is light, Like blood splashes light, and the multitudes of sleaze never made so much of an impact to make the movie that memorable. Though the last act of the film makes up for a tad bit, a classic cat-and-mouse chase between the killer and the last victim, it still abruptly ends with a pre-final credit moral telling us that God decides the fate of each man for their deeds. Which is awfully preachy for me, even as a Catholic. 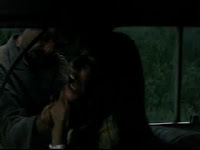 Still, I do can appreciate an effort, and while Trhauma is an uneven mish-mashing of American and European influences, the it's bad-but-good vibe can still be shaken from it, especially if you can love a slasher film so easily. If you can track it down, I normally wouldn't recommend it, but if your cat is willing to be hacked off with a sickle again (I meant your curiosity), then go ahead and try it. You could either hate it or love it.