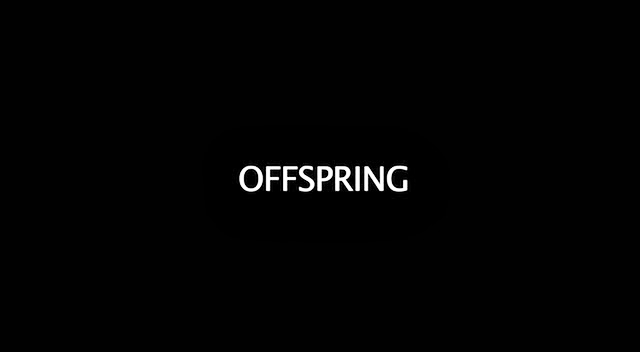 I went out and decided to see Offspring after finishing the Off Season, a novel written by Jack Ketchum, who in turn had written the book this film was based on, just to see if the it will live up to the books' signature splatterpunk notoriety.

Our opening act? Some guy burning the midnight oil working on some animation while his wife and baby daughter are asleep upstairs gets a strange sighting of a raggedy girl dropping a flower on his front lawn; at the same night, a drunken single mother drove home only to find the lights are still open, the kitchen a mess, the babysitter hacked and disemboweled by kids wearing cavemen outfit and her baby dead inside a plastic bag, before biting the big one herself as one of the kids attacks her with a hatchet.

Strange, and yet gory. I shall continue.

The murder soon sets off an ex-cop to handle over the case, seeing that he had seen the likes of this before. Apparently, the culprit is a clan of cannibalistic cave dwellers whose laughable outfit animal skin and homegrown culture of blood and mayhem had been terrorizing the town for many years, which now targets the Halbards, the local married couple we saw in the opening, the next night, breaking into their house and begins to slaughter the husband, tries to rape the wife for breeding and chases after their house guests, Claire, her young son Luke and the Halbard's infant daughter deep into the woods.

There's also the case of Claire's psychotic soon-to-be-ex-husband driving all the way to find her, but with the bloodthirsty killers hot on everybody's trail, who shall live or die is a matter most complicated and insane.


This should have been a good film, but I saw a lot of cons that prevented me into fully enjoying this brutal and nearly-unforgiving movie; plot-wise, this is the original 1977 The Hills Have Eyes done in a seaside community and with realistic gore. Both films had cannibals wearing fur skin and animal bones, picking off people for meat and breeding to ensure their survival only to be challenged eventually when one of their targets decided to fight back. What makes the plot of original The Hills Have Eyes work is that, the wild cannibals lived in an area where food is scarce, forcing them to resort to cannibalism for sustenance; in here, the cannibals in Offspring lives in a seaside community in a time wherein modern norms such as internet and cable TV are fully grasped, so making the cannibals untamed savages just simply sticks out like a fish out of water, making the entire story hard to be taken seriously.

But it's a horror movie! It's not meant to be taken seriously, you say? Well, I would say so too, but the film here is seemingly trying to take itself seriously as one would notice the lack of any icebreaker to its sinister and mean-spirited tone. It struggled to shock us, and sometimes it succeeds, but we're alienated to feel anything for these characters since they all lack any proper development and a decent (or should I say experienced) cast to play them. For the cannibal's case, any explanation to why these savages are there in the first place would have also helped build a more menacing character for them; hints are given that these guys are around for a very long time, devolved into monsters that cares very little to who they hunt down just for the sake of food, but other than this obvious trait, nothing else. They're simply there.


Often the silliness does have its charm if you look at the film with cheese, but its dead serious tone really kills it. Interesting to say, this isn't the first time we had a fur-coat wearing killer in a slasher movie; a late 80s cheapo known as Memorial Valley Massacre also had a wild jungle man as a menace, but unlike the clan in Offspring, he's no cannibal and he kills to protect his territory. Honestly, that film was a lot more watchable than this sullen sulk-fest as, at least, it knew how silly its own plot is and just gave us a cheesy good time ala B-flick, So is there anything that makes Offspring a worthwhile watch anyhow? To be frank, yes: gore.

Offspring is really brutal; dead babies, children being shot or forced into bonfires, wives being raped in front of their friends, husbands and/or children, gooey disembowelments, beheadings, the film somehow captured the splatter and mayhem the books they based on have, but with a proper amount of budget, I'm sure they could had done closer. It may look like a cheap excuse to enjoy the film, but it will all depend on taste. Personally, I couldn't give this film a higher rating since at the end, I still felt empty; I didn't enjoy it, but I never found it as a waste of time either since it did offer something to watch in a worthwhile. I'll still prefer the books for that matter, but for all of you who're looking for a cheap gore flick to satisfy your sick and twisted fantasies, I wouldn't recommend it, but try and see if you'll like this one.

Bodycount:
1 female seen dismembered
1 baby found dead inside a plastic bag
1 female hacked with a hatchet
1 male sliced open with a dagger, disemboweled
1 male eviscerated with a machete
1 girl shot
1 male ran through the neck with a machete
1 female shot
1 male shot on the head
1 boy shot, forced to a bonfire
1 boy shot
1 male stabbed on the chest with a dagger
1 male had his head sliced in half with an axe
1 male neck broken
1 boy hacked on the chest with a hatchet
Total: 15
Posted by Kaijinu at 10:49 AM