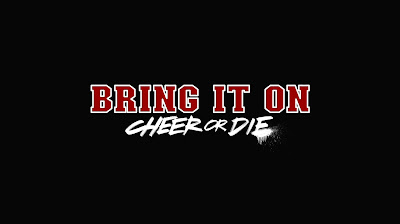 Bring It On: Cheer or Die (2022)
Rating: **
Starring: Kerri Medders, Alten Wilmot and Sierra Holder
Let me get it out there first that this is my first Bring it On movie. I mean, I know about the existence of this two decade-old cheerleading teen comedy franchise, but raising school spirits with pom-poms and backflips never really struck my fancy so I never bothered with it until, that is, I heard it's gonna throw a slasher horror curveball unto itself. What can I say? I'm a curious creature and a slasher completist to boot, so who am I to devoid myself of such oddity? That being said, I'm going to cover this title as a standalone slasher hookum, rather than an entry to the whole Bring It On hullabaloo.
The film opens with a regional cheerleading competition back at 2002 where a couple of snooty Elk Moore High Diablos cause the death of another member during a human pyramid maneuver, leading to high risk stunts being banned from the school's cheer programs. Flashforward to the present day and Diablo cheer captains Abby (Kerri Medders) and McKayla (Tiera Skovbye) petition for the return of these risky yet exciting stunts in hopes of winning that year's regionals, but stickler of a Principal Simmons (Missi Pyle) is determined to keep playing everything safe, so much so that she threatens dire consequences to whoever will be caught even trying a single Toe Touch. 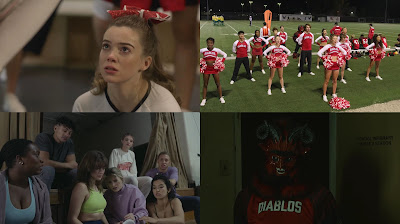 Thinking of a way to defy Simmons' grave little warnings, the Diablos captains and the rest of the cheer group cook up a plan to secretly use one of the school system's unused and abandoned buildings to hone their cheerleading skills over Halloween weekend, unaware that someone donning the Elk Moore High's devilish mascot suit awaits them there, with a murders in mind...
Practically, Bring It On: Cheer Or Die (2022) strolls along the formulaic paint-by-number teen slasher path, a rundown of the most basic of basic plotlines of one to two dimensional victims-to-be getting trapped in a location, hunted down my a masked maniac through an assortment of sharp and pointy things. It's predictable in its shallowest, a fact that doesn't help it's lack of noteworthy bloodshed, thrilling scares or truly any exploitative elements due to its PG-13 direction, making Cheer or Die almost relatively harmless as a bodycount horror attempt, a cheap dulled edge that only kinda works thanks to some hammy self-intrusive writing and cheesy scenes here and there. Given that the movie tweaked its approach and found an angle to focus on, maybe work in some splashier kills, a more compelling whodunnit or even go all out with the horror-comedy aspect considering the film had our squad using their cheerleader abilities to evade and cause harm, or our killer offering chances to live in exchange of perfectly landing a stunt, I can sincerely say that this film could've given us something more fresh and exciting than the overly familiar popcorn flick we ended up with here. 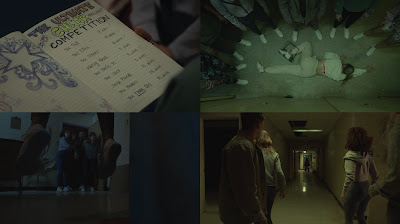 Frankly, Cheer or Die can be a tolerably watchable and maybe even a bit fun if you're not in a demanding mood, but it wouldn't surprise me much if hardly anyone bothers to bring this up in conversation. Creative concept with a lackluster execution? Yeah, quite a shame...
Bodycount:
1 female falls off from a human pyramid, neck broken
1 female smothered to death with a cheerleading pom-pom
1 female strangled with a blood-pressure cuff, hand cut off with a paper guillotine
1 female brained to death with a toilet seat
1 male hacked on the back with an axe, dies from injuries
1 male gets a TV dropped unto his head, electrocuted
1 male shot on the head with an arrow
1 male found hanged on a noose with a knife in his head
1 female had her throat slashed with a spade
1 male gets a thrown javelin through his side
1 female ran over with a bus
Total: 11
Posted by Kaijinu at 4:34 AM