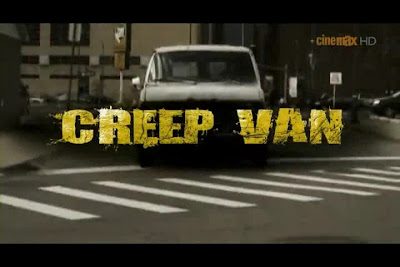 What do you get when you cross high-tech weaponry, crude and rusty materials, and a banged-up child-molester van? You'll get a cheap B-flick involving a mad driver working behind his own pimp van!

Campbell is a guy down on his luck; his girlfriend cheated on him and kicked him out of her house to add insult to injury, almost making him homeless if it wasn't for a good friend renting out a room for him. Campbell also has no stable job and he's practically an idiot at some point, but when he did got a job at a car wash, things just got a little more frustrating when he's doing most of the job while his workmates spend their time smoking weed.

But Campbell has plans. Not exactly helpful plans but plans nevertheless: he plans on buying a van coz he needs get to work on time, have something to live in it in case he couldn't keep said work, and/or have something to impress the ladies with.

Luckily, he notices a banged-up van parked for sale near a Mexican food joint, but little did he know said van is owned by a viscous killer and the sale sign was just one of the maniac's lures to bring in more victims for his murderous fixins'. So now Campbell is deliberately stalked by a madman behind the wheel, a madman who will now bump off anybody that gets in the way or is with Campbell.

Cheap in almost every way, Creep Van is a B-flick with a good dose of gore, delivering most of what I'm looking for in a slasher flick. It's steady in pacing and knows how to make the grue count with some nice mixin's of CG and practical effects killings, though plenty of the victims are just random dudes that pop up, do some silly things, make a scene, whatnot. Still, I don't really mind the characterless meat if it meant a weird and bloody death for each of them coming from a "high tech" death machine that was once a van, a fact that remains funny to me since the guy who rigged this hardly looked like the mad genius kind. Plus, we also have some cameos from other B-listers faces such as Lloyd Kaufman and Chromeskull's Angelina Armani to name a few.

Creep Van's other highlights includes its campy, or at least silly, tone that hits some funny bones right. It's not anything of a spoof, but has a good sense of odd humor like a weird sex scene that looks more a prolonged foreplay than an actual love making. Though the ending itself is a bit offbeat, Creep Van's unpredictability is what made it kinda special for me.

It's not gonna be a crowd pleaser, especially with a title like "Creep Van". In fact, I wouldn't have given it a chance if I didn't brave myself to pop it in my disc player and hoped I'm just judging this book with its cover. But if you would give it a chance, you might see something you like. It’s an hour and twenty minutes of cheese, blood, boobs, and cheapskate movie making, but if you'll have fun with all of the going-ons, I think that calls for some heads-ups for you all. 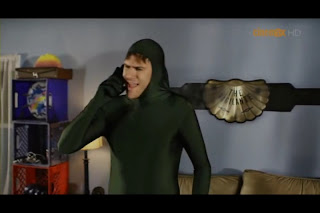 Bodycount:
1 male sliced in half with a car window
1 male crushed by van
1 male had a spike ran through his chest
1 female gets a spiked metal weight pounded against her head
1 female had her head crushed on sliding door
1 female crushed in half against van
1 male ran over and crushed by van
1 male gets a spiked air bag smother his face
1 male and 1 female hit by an incoming van
1 male found impaled on a radiator pipe
1 male found with his head impaled through a windshield wiper
1 male found hanged
1 male gets a car antenna to the neck
1 female had a crowbar shoved to her mouth
1 male had his face sliced off with a car window
total: 16
Posted by Kaijinu at 8:41 PM