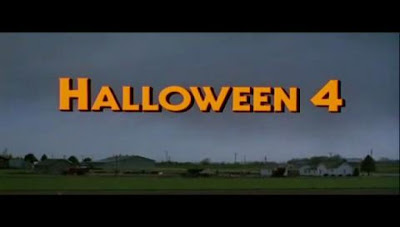 When I first saw this title, which was sometime around a few years ago back at College, I was all hyped up due to the fact that the very mediocre (yet watchable) title-only sequel Halloween 3: Season of the Witch, a movie about mass infanticide courtesy of some Halloween mask sorcery, left a rather unsatisfied taste on my mouth. As a slasher fan, I guess it's only natural to be all giddy in seeing the grandfather of all slashers come back in his whole gory glory but being released so late in the 80s had me worrying. Worrying it may not taste as sweet as I hoped it'll be and, true enough, it wasn't.

It was somewhere in between "good" and "bad".

Ten years have passed since both Michael Myers, the infamous "shape" that terrorized Haddonfield, Illinois with bloodshed, and his psychiatrist-turned-hunter-of-evil Samuel Loomis were charred alive in a fire that should had killed them. Instead, Michael was left in a coma and Loomis survived with just a few burns, the latter still worried about The Shape's still living presence.

This one Halloween Eve's night however, Michael was scheduled for a hospital transfer when, after hearing a conversation between two ambulance crew about Michael having a niece, he wakes up from his decade long slumber and murders an entire ambulance staff before escaping into the night. With Loomis' Michael-senses tingling, he went on to pursue the killer once more, intending to finish him off for good. Least to say, a wine-slinging preacher Loomis hitched a ride with pretty much explained the problem of his predicament: "You can't kill damnation, mister. It don't die like a man dies."

All the while, Michael's new knife target, Jamie Strode, seems to be having it rough already as she is bullied and teased for being the orphaned niece of the Boogeyman. Her only sense of security was her adoptive older sister Rachel who just passed off a date with the local hottie to go Trick or Treatin' with her little sis; but with Michael skulking around town knifing people to death and Loomis' presence riling-up a bunch of gun-totting locals, forcing the convinced sheriff  to take some lawful action into the situation, Jamie might be up for a Halloween night she'll never forget.

Halloween 4 should have been a grand welcome back to the one I call the "messiah" of slasher flicks, the one man-monster that started the boom of the slasher Golden Age. After the original's director, John Carpenter, attempted a luke-warm entry to what could have been an "anthology film series", six to seven years of hiatus almost spelled "rest-in-pieces" for our ole' buddy The Shape until somebody decided to resurrect the franchise to cash in on Michael's cult status.

The problem was (least for me) that the movie focused on some odd angles, mostly on the fact it kept a keen eye on a young Danielle Harris character Jamie and her desperate attempt to cope with the fact that she's related to a demented serial killer as well as survive the night her uncle decided to visit town. Should have been good, honestly, if only it didn't felt like the story cheated on so many aspects of what makes a good sequel, which is normally to tie itself from a prior title without giving up its own story. Too many elements from the first Halloween was linked to this and yet it failed to explain how Laurie Strode got a daughter and how Jamie got some sort of Psychic connection to Michael. It was as if it's expecting a lot of people to know exactly where all this is coming from but. franky, it ain't working too well.

Apart from that, the film also needed more blood, guts and thrills, to step up Michael's game and make him fit to the generation he's going to slaughter. Instead, they tried the slow-burner approach which failed along the attempts to flesh out the two lead characters, which I find really hard to root for if they spend their entire screen time screaming and crying. To make matters worse, I never thought I'll see the day Loomis go overboard on the doom-saying business and Michael Myers looked less threatening with that clean cut version of his mask on. (How on Earth did he got another exactly like the one he had years ago?)

On a positive note, there were some good scenes that got thrown in later in the movie; there's one with Michael skulking around a garage shop wearing a more effective looking "mask" made out of bandages (Honestly, I prefer this over that cheap Halloween mask he wore on this title), and another involving a massacre in a moving truck, though none of them had it like the highly acclaimed rooftop scene where Michael stalk and lumbers as he tries to stick his knife to either his niece or her adoptive sister. The sub-plot involving the feds and the town's more revenge-fueled residents (which, for some reasons, are rednecks), though not fully tackled, is also a breath of fresh air for a slasher title.

The ending of the film is an anomaly for me; I neither liked it or hated it, but I can't really deny how satisfying it was. Just too bad they didn't bother to follow it up with the next sequel and, instead, actually ignored this shock-twist almost completely! (And no explanation, too! What the fuck, man?)

In the end, it's a fan's movie. Die-hard Halloween followers will definitely get a good kick from this, but I'm gonna stand on my ground and say that I really expected more coming from a Halloween entry, especially if it's a comeback for Michael Myers. More satisfying murders would have helped and I wished they had loosen themselves up a bit with the continuities; perhaps it's this trait's the very reason why I chose the underdog entry Halloween 6: Curse of Michael Myers over this as Michael's true comeback for me. (Pitchfork me all you want, I ain't changing my claim!)