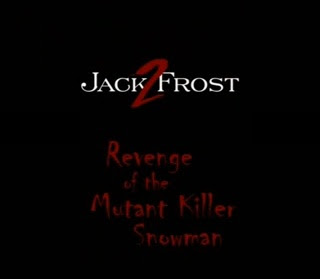 My blogmates warned me about it. My gut told me not to see it. But my brain, my curiosity and a tiny voice in my head that sounds like Michael Caine had me mustering up enough to try it out.

Expecting the worse, I try reminding myself the charm of the first movie; Jack Frost was a bonafied (if not overlooked thanks to a similarly titled family flick also involving a talking snowman. Oh God, I should sue them...) B-flick best enjoyed if you would throw away all sense of realism and just have yourself a laugh. It was a flawed yet enjoyable fluke, but can a fluke strike the same luck twice?

Following up from the events of the first flick, it was a year later and Sheriff Sam Tiler is traumatized after serial killer-turned-genetically-mutated-killer snowman Jack Frost terrorized his town. We watch him break down into a rambling paranoid in front of his therapist (and unknowingly, to the rest of the clinic's staff) as the horrors only a wise-cracking snowman can unleash are retold back at us. Unfortunately for him, said horrors are about to make a comeback...

After a hick decided to betray his sheriff for some cold cash by pointing out the whereabouts of Jack Frost's liquefied remains to a government fed (and got paid with a bullet, of course), the boys back in the lab were more than quick to finally start experimenting on the goo. But one dumb mistake leading to another, a carelessly placed coffee mug was tipped into the canister containing Jack, somehow resulting to a chemical reaction wherein rejuvenates the killer snowman back to his old self and plots a good old-fashioned revenge on Sheriff Tiler, who's currently vacationing with his wife in the Caribbeans to celebrate the honeymoon of his two deputies, thinking the warm sun and hot sand is all they needed to forget Frost.

Using a new psychic link he got after acquiring some of Tiler's blood last time (and his newly ability to remain frozen even under the sun) Jack tracks down the good sheriff, kill off a couple of random vacationers, and gives the whole island a winter makeover, complete with killer snowballs. With a seemingly more powerful killer snowman to beat, does Tiler even stand a chance? As a bumbling paranoid, not much, but luckily we still have his wife to save the day!

Jack Frost 2 is not a horror film. In fact, calling this horror is only true in the sense that it's an aficionado's nightmare; everything about this movie is cheap, oddly even more than the low-budgeted first! The cinematography often switches from standard cameras to hand-held ones, the set looks awfully handmade, lazy use of unimpressive CG and some very cheap looking special effects just to name a few lashes, but what really tussled my noggin was the fact that the movie, despite the momentous gore and high bodycount, never brought anything near as grim as some of the bits of the original, something made worse by the odd duck attempt to suddenly transition a slasher movie into a Gremlins ripoff somewhere in the 3rd of the film, resulting to a comedy with a splatstick sensitivities and styrofoam monsters that barely worked.

But, on a low brow manner, it ain't all bad; when it hits you right, Jack Frost 2 can also be a movie so terrible, it's almost funny. Almost. The campiness of the flick, whether intentional or not, was definitely made for the easily amused, which is good if you're one of those people looking for a senseless B-flick to laugh at while drinking some brewskies. I mean, you can actually tell this isn't meant to be taken seriously; a snowman in the tropics? It's ironic plotting at its shallowest. You can have a hardy laugh at the sad attempts of both horror and comedy aspects, wherein some of the material works and then there's those that felt forced. Eitherways, the net result is a movie that can either be loved out of pity or hated for being pitiful.

Do I dare you to brave this film then? If you think you can withstand an hour and a half of senseless "horror-comedy" or you're one of the few who actually enjoyed the original, then there's actually a chance of you liking this one. If not, then, I wouldn't blame you. It's a big step down frankly, but saved by a hair string of bad taste charms that only a few can appreciate.