Only Grue Can Prevent Forest Fires: The Legend of The Psychotic Forest Ranger (2011) 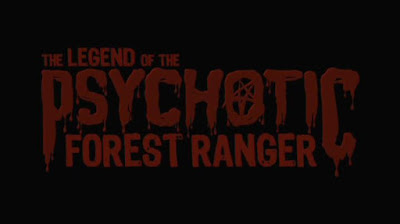 The Legend of The Psychotic Forest Ranger (Canada, 2011)
Rating: ***
Starring: Michael G MacDonald, Samuel MacDonald LeMoine, Colleen MacIsaac
This is the kind of movie you would get when the overall production was funded with cheese and beer. A lot of cheese and beer. 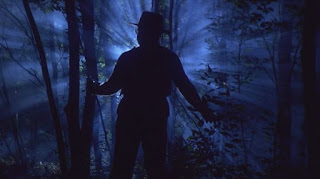 The premise isn't far off from your casual backwoods slasher as we follow four buddies out driving to the mountainous woods to celebrate their last days out of school. Seeing most of the gang are hardly the responsible mature-type and they barely packed for their trip save for a cooler full of beer, it isn't long before they're trailing down the road by foot later that night because they didn't bother giving the car a full tank of gas. Fortunately there's a seemingly unoccupied house nearby and, judgement and legality be damned, our gang breaks in to seek shelter.

After a series of false scares, awkward sleeping arrangements and an encounter with a random forest ranger who warns them of a prowler who's out lurking in the woods recently, the foursome double in numbers by morning as another group of teens show up hoping to party in the house, apparently keeping an eye at the place for some time and making sure the owners left to avoid trouble. All's fun and dandy, until one of them didn't return from gathering firewood.
Decades ago, you see, there was a priest-turned-forest ranger who died in a forest fire after trying to fight off some troublesome hooligans, swearing vengeance in Satan's name as he roasts. Some say he's gone, others will find him hunting down anyone unlucky enough to end up in his way, looking the least threatening until he's hacking his victims down to size and assaulting their ears with terrible puns and one-liners about forest safety. For our unlucky shmucks, they will find out this supposed legend's all too real and the unholy abomination that is a tubby, giggling, psychotic forest ranger will be their doom! 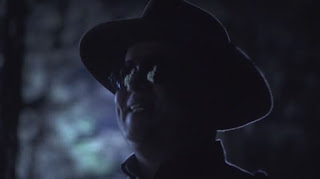 Now, understand that the bare bones of The Legend of The Psychotic Forest Ranger (2011) is that it's cheesy. Like, from the title alone, its high grade fromage should really go without saying. For anybody expecting something deep, new and unexpected, this film isn't gonna bother with any of that and it will just run its course as a homage of sorts to bad, late-80s cheddar horror and do-it-yourself movie magic with the enthusiasm of a so-bad-it's-good parody. For a low budget production, it isn't that badly made aesthetic-wise and it even scored some decent enough make-up effects for a few of the kills, but the predictable plotting and intentional bad acting and writing might turn away some folks who are looking for a more straight-faced affair in their horror movies. But if you know ahead what you're getting into and don't mind a ton of ham and tongue-in-cheek in your dead teenager films, then this has more than enough cartoonish campy fun (pun intended) to give around the bonfire, from the annoyingly hilarious victims and the cheesy Satanist axe-murderer in a ranger's uniform, to the paint-by-number slasher tropes and outrageous dialogue. 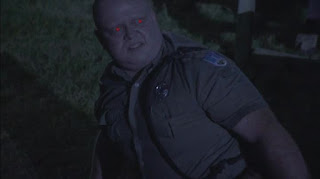 Breezing through its plot modestly paced and having silly shenanigans between each kills that have their moments of being giggle-worthy (at least, those that hit their marks), The Legend of The Psychotic Forest Ranger (2011) is just simple fun. Hardly a grand display of what a modern throwback slasher could be, I still find this as an entertaining mess that could have done worse!
Bodycount:
1 male stabbed on the face with a broken bottle
1 female stabbed with a stick
1 male gets a bear trap snapped over his neck
1 female hacked with an axe
1 male hacked in half with an axe
1 female stabbed to death with a car key
1 male impaled with a thrown log
1 female beaten with a pot
1 male gets a police baton ran through his head, dies later
1 male and 1 female immolated in car crash
Total: 11
Posted by Kaijinu at 11:42 PM