Wow, four years of dead bodies piling up, masked maniacs on the prowl, and me sitting through them all, from the best to the worst. 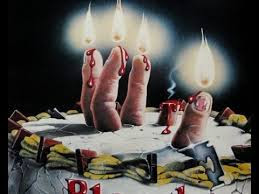 I would first like to apologize for skipping the blog's birthday last year; I was in transition to another client on my job and a lot of my focus went there. It was hard but things sort of got easier when they transferred me to the Email department of this new product. It was less stressful and I finally got most of my energy back into reviewing these films.

Apart from this, I was also preoccupied with a lot of art related stuff, mostly starting my own gag webcomic which is really nothing more than a fun way to pass my time and practice my writing and artistic skills at the same time. If you are into furries lame comedy then please give my work a try and tell me what do you think.

So, horror oriented topics? Apart from the fact that I hadn't grown an inch four years ago and I am currently re-writing most of my earlier reviews (I cannot believe my grammar then. Me fail english?! That's unpossible!) I am glad to say 2015 is looking quite good for genre flicks; the slashers are getting more respectable entries from indies and I am tempted to do a sequel post to my 101 Maniacs, titled 101 Maniacs 2, where I'll post top 202 to 102 titles, including some of the more recent gems I've seen such as Girlhouse (2014), and Dude Bro Party Massacre III (2015), as well as other obscure titles like Coda 1987 and Graverobbers (1990) that I just found out this year.

I also get to see other non-bodycounter horror flicks like It Follows and The Babadook, two films that are now high on my list for one of the horror flick to see before dying. Adventure/Action flicks like Jurassic World, Terminator: Genisys and Mad Max had also hopped up my interest in non-horror genre flicks as well, which means I'm kinda hyped for the upcoming animated films Disney's Zootopia and Sly Cooper's first movie, both promising some interesting ideas and stories.

With my film life getting pretty busy and colorful, I guess I would like to thank you guys for putting up with me and my not so plentiful updates and posts. I have to admit, it's not as much as I post when I first opened this blog but I guess when priorities change, this shit happens! (a-hyuk!) So, I would like to thank my blog buddies, Maynard, Michelle, Craig, "Lord Crayak", Hudson Lee and Luisito for dropping by once in a while to say hello. (And apologies if my eccentric nature might freak you out. ^^;)

And, of course, you, the random reader who may have stumbled into my dark side of the web by accident or out of curiosity. I will try to keep up with the times and my growing number of films to review (which is nearing to end it's second log book as of writing this) so here's to another year of bodycounting and more to come!
Posted by Kaijinu at 12:28 AM