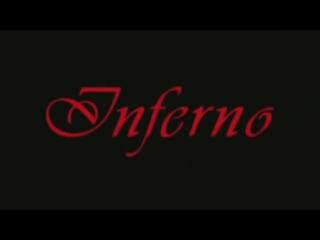 So, we got a certified shocker from Argento known as Deep Red and another classic known as Suspiria soon after. So it seems that Argento was finally making a name for himself back then and doing a sequel to Suspiria was a bright idea, yes?

Honestly, no. I find that very unnecessary.

An inferior entre that does little to improve its older and wiser sister film, a shlock that I could watch just for the deaths alone. In Inferno, a girl named Rose Elliot bought a book from a local antique shop, the diary of E. Varelli, an architect who made three houses that would later be settled by the infamous three Mothers (one which had met her demise previously in Suspiria). After feeling a presence brooding over her, she calls her brother Mark, who is studying musicology in Rome, to come and meet her as soon as possible. It's not too long before she gets herself murdered by what appears to be cronies of one of the three Mothers, and soon everybody else who gets too close on finding out about the Maters and their secrets will meet the same fate.

As Mark gets to New York, will he too fall victim to the Mater? As he sets on his own investigation into his sister's disappearance and of the book, the nearer Mark gets into find out the truth, the more blood will be shed.

Suspiria had it made blending art house visuals and murder set-pieces. Inferno, however, while still playing both cards, got too full of itself when it comes to the kills. In a decade full of marketed murders ala slasher movies, it went along the fire and played as much bizzare murders as possible, which meant more innocent bystanders being placed into the story, all of them unwittingly tangled into the web of mystery that is the Mater and obviously fated to be killed.

Sadly, while the murders are lurid and tender fun, the story lacked surprise and originality. We all know the supernatural was to blame and that a coven is behind the series of attacks; so the only thing Inferno had it going for us is when would our dull hero figure out who or what the Mater is and who among the crowd is she.

This left Inferno to be a bit generic, conventional and a stale giallo hybrid, which is a shame cuz Dario placed a lot of heart for this entre', hiring progressive rocker Keith Emerson who did a soothing yet thunderous score that matches the growing power and intensity of the coven. Mario Bava, Dario's mentor, was also hired to do a good eye on trick shots and optical effects (with beautiful results none the less) and Leigh McCloskey, the actor behind Mark, practically did his own stunts during the climax which was, title suggested, a blazing inferno. Then again, Argento was suffering from hepatitis at the making of this movie, so I guess I should cut him some slack.

It's still beautiful, I'll give you my word, and entertaining none the less. Looking pass the empty story and the recycled plot, Inferno is a blazing good time that answers very little of the real mysteries surrounding the The Three Mothers (like why do they exist in the first place? Why do they bring plagues?), and solely exists to frighten us using the uncertainty of the scenario and the fact that evil will and just exist. At least, we all should just look at the bright side of all of this: while Inferno, with its shortcomings, still managed to came out entertaining, this might be a fairer follow-up compared to that dreck Mother of Tears...Dario, you disappoint there.

bodycount:
1 corpse found
1 female glimpsed hanged
1 male found with a knife through his neck
1 female knifed on the back
1 female repeatedly hacked on the neck with guillotine
1 female attacked by cats, knifed
1 cat bashed to chair
A bag full of cats drowned in river
1 paraplegic male had his legs eaten by rats, nearly beheaded with kitchen knife
1 male found with gouged eyes
1 female got caught on a burning curtain, falls off a window
1 elderly male strangled on a vocal apparatus
1 female crushed and burned inside a collapsing building
total: 12+
Posted by Kaijinu at 9:55 PM