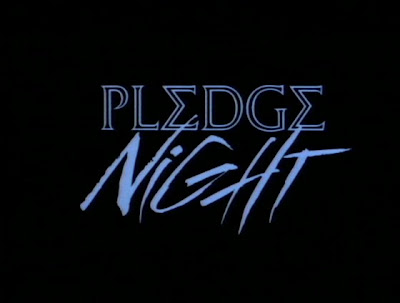 It was the time of the year again when sorority Phi Epsilon Nu was holding it's traditional "Hell Week" and a few wanting pledges were lining up for the winter fuck-up of their lives.

Unfortunately for them, one of the sorority boys was possessed by a supernatural pledge-killed-and-turned-boogieman Acid Sid and it wasn't too long before he's breaking out of bodies and killing every frat member and pledges with everything from cherry bombs, bugs, an eggbeater(!) and even his own spinal cord. Why is he doing this? Who cares, but thirty minutes of cartoonish slasher antics is enough to cover up the cheesy (and nearly useless) attempt to rationalize this dung-butt attempt of a comedy hybrid.

For my fellow slasher fanatics, there's nothing quite as nauseating as a dead teenager flick that's stale and overdone. Sadly, for those people who likes their slash antics fresh and new, Pledge Night had none of these and it's actually a star travel-away from anything new and creative save the murders.

The acting is decent and so does the direction, with the plot almost had everything going for it until it was dropped at the near end when the killer finally made his appearance, punching a lot of  holes into the story in the process. In fact, there's barely any story to hang on to since it's basically just a hell week in a sorority that just gone bad after a sorority brother dubbed "Crazy Dan" got possessed for wahtever reason.

However, I can't disregard the late 80s cheese charm of Pledge Night; the plot may fail a lot, but it's got the bad charm ringing to it so much that you just had to go along with it until the gooey stuff starts. It's entertaining in a shallow yet sly manner, with much wit and low-brow humor added in the mix. The hazing part tends to get a bit slow but the wait is all worth it if you're a big fan of one-lining, supernatural, killer hippies who could have been easily passed off as one of the many Freddy clones made in the late 80s. Born out of vengeance from the same sorority who caused his death, Acid Sid had me with his acid-trip murder, mayhem and mischief, embracing cartoon logic where everything is a weapon and anything is possible. He should have been bad, but he delivers it with much mean-spirit and cockiness that you can forgive his cheap-latex acid burns and his ever-spatting one-liners to rival the corniest slashers I know.

In fact, you can look pass all the bad comedy efforts and just watch this for the kill-a-thon last bulk ala bad cheese mode. Pledge Night is far from a masterpiece, nor is it terrible. But if you're just as daring as the unlucky pledges who lost their lives here to a one-lining killer ghost hippie, I wouldn't stop you to give it a go!

Bodycount:
1 male accidentally bathes in acid (flashback)
1 male had his groin torn off
1 male stabbed on the back with screwdrivers
1 female electrocuted in bathtub with live radio
1 female gets an eggbeater shoved down her throat, mutilated
1 male torn open
1 male had his arse blown apart with a cherry bomb
1 male strangled with a dismembered spinal chord
1 male got bugs broke out of his gut
1 male had his neck crushed, later found with his brains spilled open
1 male had his head twisted
1 male suffocates inside a gut wound
1 male and 1 female killed with sword
total: 14