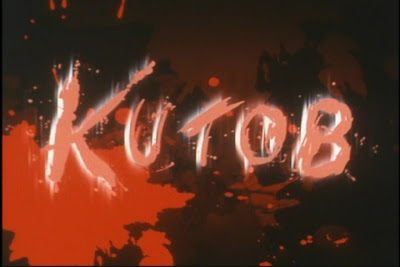 Slasher flicks from the Philippines. Rare but not impossible as you can see. The main problem with my home country's cinema (and I mean it. It's a problem) is that we never took our horror genre seriously. Sure, campiness is a good excuse for a date movie but for an avid horror fan like me? It gets tiring if all the "horror films" your country makes are ghosts and ghouls over and over again. Not to mention fantasy flicks that feature copyrighted monsters (go watch Panday 2 (2011) and you'll see the kraken from The Clash of The Titans (2010) rehash as one of it's main baddies).

Some time ago, in 2006, we got ourselves two slasher titles; one was the shameless plagiarism of Alexandre Aja's cult hit High Tension (2003) called Ligalig (2006), whose director, Cesar Montano, tried to cash in to an American studio for a remake deal. (Yeah right, dumb fuck, we're not effin' stupid) The other was this, a somewhat decent thriller that knows its way around the book.

Kutob starts out like any slasher flick does; a conclusively traumatizing event involving a young boy being beaten repeatedly by his adoptive aunt for something he had done. We're left to guess what was that all about but seeing how pissed off Auntie is, it must have been real bad.

Fading to a couple of years later, we're now switching our attention to one Erica, a working woman whose relationship with her boyfriend, Carlo, is in shambles as she suspects him of hooking up with another girl behind her back. An argument then follows after Erica found a necklace in Carlo's car, leading to them to break up for a while.

One fateful day, Erica meets Lemuel, the same young lad from the opening now grown up and, in this situation, just helped her hide from Carlo when he tries to explain that the necklace incident was just a misunderstanding. In gratitude, Erica befriends Lemuel, which he took in as a romantic gesture much to the disagreement of his aunt.

As time passes, Lemuel's psychosis worsens; going from clingy to homicidal, he begins to stalk and kill those who upset Erica, as well as whoever he suspects is talking behind his back and giving him a bad name. Things get worse when Erica, fed up with his clingy attitude and weird personality, starts to patch up with Carlo, forcing Lemuel to add up his bodycount all for the sake of being together again with his "one true love".

Cheesy, sex-less, and the murders are awfully tame compared to its brethren, Kutob more or less reflects its country of origin's restraint from exploitative elements (sigh, what happened to the good 70s/80s?) but, entertainment wise, still has this watchable quality in a sense of a time-waster rental and the cliches call for some mediocre fun.

As an influenced poduction, we can see Lemuel's character is a derivative of Psycho (1960)'s own Norman Bates as both killers have difficulty with socializing thanks to the repressive nature of their guardians, though Lemuel's Aunt is more of  Mrs. White from Carrie (1976) with her religious zealousness.

The film's slasher perspective starts halfway towards the whole movie, spending the first half as a love-triangle thriller which is nothing new as we can tell where most of its parts are going; it's filled with enough tropes such as the killer's MO to murder for his love, starting with an impressively gutsy stabbing of a pregnant woman (to the womb, mind you) that marks the film's descent to the hack and slash antics, though the kills are often bloodless despite the high count.

The acting is typical but fair otherwise, perhaps from the fact that I see these people everyday on TV that the impact of their acting softens with the punch; Marvin Agustin as Lemuel did a pretty good job as a psycho, bearing an aura of a typical loner though his over-sweating can get a little cheesy and his topless scene is an obvious sell-out to his fan girls. Rica Peralejo plays Erica, an oddity of a final girl since I find myself unfeeling for her character. Yes, it's ordinary for her to be bitter at the beginning but half-way of the movie, I've felt that her character somewhat changed and her easy judgement that her new "friend" is relatively harmless just because he's quiet felt stereotypical. Everybody else is just meat that's meant to be picked off. Either that or my ignorance of my own country's TV and movie personalities deprive me of recognizing one single face in that crowd.

So Kutob may not be the best example of a foreign slasher out there, nor do I have the hopes of it being recognized outside my country, but it's far a better effort compared to most of our horror flicks. I just wish we could do more movies like this instead of wasting our time doing lame monster/ghost flicks involving mythical creature that stopped being scary 20 years ago. Then again, I do have to thank those kind of movies for one thing: pushing me to embrace these bodycount flicks cuz there's nothing scarier than a man with a knife. Whether you rent it or own it, it's a decent movie to see and enjoy in a lonely night.