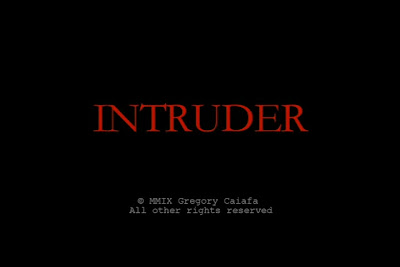 Fresh out of the loonie bin, Lila joins her boyfriend Andrew to his family's estate in the country side to have some time alone with themselves and away from the estranged city life. That is, until, the neighborhood cat was found nailed to their door, news of a murdered newlywed is heard, and a man with a clown mask is seen pondering around the house. A murderous psychopath is on the loose, yet Lila and Andrew might find themselves all too late as the Intruder had already set up a deadly game of cat and mouse for them, and everyone else he can get his hands on.

Not to be confused with Scott Speigel's late 80s slasher classic, The Intruder (which, thanks to this movie, I now call "Night Crew: The Final Checkout", a title that's, frankly, sounds way cooler); this rarely heard/discussed/seen indie home-invasion slasher cut itself from everything else most modern slasher flicks tried to exceed. Instead of focusing on the singular approach of stalk-kill-repeat and excessive gore, Intruder 09 focuses on building the tension and suspense around its characters, especially lead Christena Doggrell's whose own psychosis is placed upon question as the movie inches closer to its climax, her self-destructive persona found its way to some scenes involving either mutilating herself or striking back at her friends. However, on a reflective note, I never actually find this angle to be as effective as they play it to be, as the film ends abruptly with an ambiguity that's sort of anti-climatic, but is shocking while we're at it.

This being mentioned, the movie steadily paces its plot, working its way to the slaughter rather than filling each screen with a sizable bodycount, showing brutality that taps on the viewer's impulses for impact in place of detailed special effects. Only the basic killings such as knife stabbings are shown most and the movie's only touch to the generation's infamous gore loving cinema, a torture scene where one of Lila's friends got bound to a chair and repeatedly tortured with a powerdrill, showcased some serious blood work, while some of the film's more savage murders (comb shoved down to throat, mouth ripped open, etc.) had to be executed offcamera due to the film's meager budget, but due to a fairly severe execution, the impact is admirable nonetheless.

Other highlights for Intruder would be the luscious photography, from scenery vistas to interior shots,that helped brought out the movie's retro feel, although I can't say for the movie's attempt to bring out the holiday backdrop (it's supposed to be set days before and on Halloween), but I can let it slide since the focus was more on Lila's questionable insanity and less on a festive holiday slasher flick. The acting is fair and decent; nothing much can be said for this department since Christena Doggrell was the only one who stood a bit higher in comparison with the rest. (though, I do dig that weird mortician who's all giddy to show off some dead bodies with his friends! Sounds like my kind of guy!)

While it's in no competition with most of today's goriest modern slasher, Intruder had it made with it comes to chills. I personally blame the film's own title for its own obscurity; it's a rule in my book, always research for a better title, probably the one that hadn't been taken yet by a classic and widely known movie of the same  horror sub-genre. Tis a shame, it's really a good movie, I really urge you curious cats to see this one! It may take a while for it to roll, but all in clowning good time, friends!