Burnt Potato from Down Under: Houseboat Horror (1989) 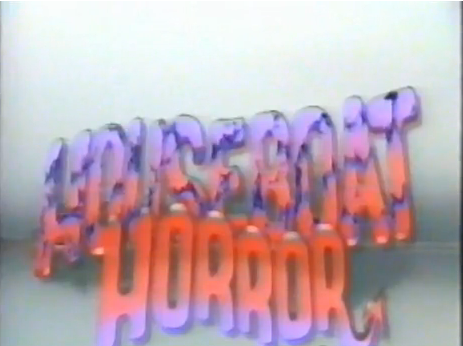 A rock-and-roll band and a film crew decided to shoot a music video at Lake Infinity, where years ago another film crew met their demise at a fiery accident, leaving one survivor, a child, burnt and insane. As any backwoods slasher enthusiasts would know, once a crispy hand grabs the machete, you can tell where this is going.

Noticeably hated for a lot of good reasons, Houseboat Horror prides itself as the first Shot on Video horror flick from Australia, a gimmick that does fairly little to make up for the numerous amount of flaws this slasher committed, involving loads of cheesy bad acting, Japanese paper-thin story, and a pacing that forces viewers to accept idiots being idiots as an alternative for brooding suspense.

Then again, there are a lot of other backwoods slashers that have done worse compared to Houseboat Horror; while the story is tacky and the characters are the kind of people you would like to die off writhing in pain through a woodchipper, the film boasts a fairly sizable kill count and a surprisingly gore-friendly outings that includes a head splitted in half with a curved machete, a nicely done harpoon shooting and a poor thespian getting a horseshoe to the eyes.

Plus, the script is bad movie good, kinda chuckle worthy at times that it did made the movie bearable even if we have to sit through a 3 minute corny music video for a song that, while good, is forgettable nonetheless. Guess what I'm trying to say here is that, while panned reasonably, I didn't find it as bad as most reviewers make it.

Blame it on my brain being mush (seeing I watched this after I saw the abysmal Muck (2015)), or my forgiving nature (for an extent), I'm giving Houseboat Horror a passable grade for being so-bad-its-good-and-funny. Now, where did I put my copy of Coda (1987)...