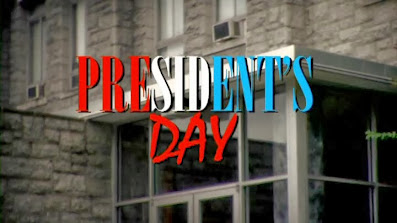 Richard Nixon, Ronald Reagan, George Washington and now, Abraham Lincoln. What's next? A slasher masked up as Donald Trump? (Wait, I think we already have that last one...)

Lincoln High is in the midst of a campaign election when someone dressed and masked up as Honest Abe, shouldering an axe, starts chopping down candidates for class president like George Washington would to a cherry tree. Caught in this dilemma is Barry (Bennie Mack McCoy IV), a young skateboarding troublemaker who gets smitten by one of the candidates, mysterious new girl Joanna (Lizzy Denning), so he cooks up a plan with his security officer buddy Kennedy (Ryan Scott Thomas) to run as president only for the sole purpose of getting to know her.

Opposing these two budding misfits is posh snob Chelsea (Nicolette le Faye), who believes popularity and manipulation are the keys to winning, as well as a straight-A student, the lovable school mascot, a punky goth chick, a jock acing his way through class by playing hooky with a teacher, and plenty more. But the further the campaign goes, the more these kids start to disappear or killed off and blame is pinned on Kennedy as forged notes with his name are showing up on each of the victims' lockers. Desperate to stop these killings and clear a friend's name, Barry and Chelsea go full amateur snoops in hopes of finding the culprit in time before it's their heads getting the axe edge next!

In its core, President's Day (2010) is basically a fun murder mystery slasher that, while suffering from a shoe string budget, still delivers an enthusiastic tongue-in-cheek direction on a classic campus bodycounter plot and, too, dish out the gooiest and creative murders a limited budget production can afford. All of which with a strong independent spirit that promises crazy fun B-grade entertainment and actually serves it.

Satirical in its tackling of school set politics and small town killings, the movie does a wonderful job scripting its story with enough wink and nods to play around the conventions and embrace it naturally without being overly self-aware and overdoing the satire. This helps set the mystery angle on sturdy grounds and branch it out nicely the more the plot thickens, even if does have a few plot holes and the set of red herrings like demented janitors who whisper-talk about poisoning the cafeteria food or science teachers with a thing for outdoor hunting aren't exactly the most misleading. (Distracting, yes, but misleading? One or two of them were obvious kill count meat!)

It also helps that another of President's Day's ace in the hole is its likable cast; McCoy IV plays our slacker lead with a whole heart and his natural friendly demeanor, may it be towards his crush, his fellow candidates or his buddy in trouble, makes it easy to root for his survival and for him to be the victorious final boy of his own little misadventure. Denning's Joanna, in turn, is a nice subversion of the new girl archetype for her openness to help out and befriend people despite her intimidating looks and her troubled past. The rest of the characters are a quirky bunch from a bass playing principal to a butterball school mascot beaming with school pride, a chunky cheese-fest of both expected and unexpected tropes that prevents this movie from going too deep into its own rabbit hole and keep the tone light and fun albeit the chopped up limbs and burnt faces.

And speaking of which, it is mentioned that the film ran on a microbudget so there are moments that the special effects and make-up work looked dodgy at the least. But thankfully, Tom Savini School of Makeup graduate Kaleigh Brown often found ways around the budget limit and still treats us grue fans to some inventive juicy kills, the best among these do-it-yourself practical works includes an opening coitus interruptus with an axe, a paraplegic stalked and hacked to death, a nasty paper guillotine beheading and a head crushed with a mop wringer!

There's really a whole lot to enjoy in this little gem but the scope of the product is probably the most admirable considering what the good folks behind the movie have to work with and I can proudly say that their diligence paid off. President's Day (2010) may not be slick, but it is a testament that some good movies can be made for less and independent projects can still surprise us. Genuinely recommended for your slasher collection!