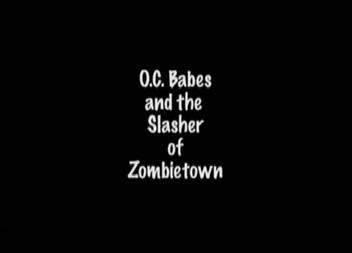 I've seen better Shot on Video movies than this.

Okay, listen up, folks! I'm reviewing this flick to give those who's planning on watching this a heads up for their money! First all, according to the back of the box, the film is a "horror-comedy" about a group of horror stereotypes locked up in a bar due to a "zombie outbreak", unknown to them that a serial killer's locked up in the bar too and is now killing them down, one by one. The usual gig.

It sounded cool, alright, and I actually bought this thinking it's going to be a fun indie mess like Thankskilling (2009). As always, though, I want to shoot the dumb-lard that is myself for thinking that. 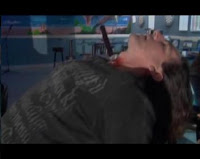 Made with zero budget, the film lacks the promised zombies and instead just cut in some scenes from Night of The Living Dead (1968) to pass as this film's shambling undead. It's lazy film-making. Right there. And it sickens me. There's not even any decent "comedy" in this nor "horror", it's just jumbled mess of garbled audio, bad lighting, horrible special effects and a plotless direction.

If the filmmaker's intention was to make a quick buck then I dunno if this is gonna cut it. I see more people burning these copies in a bonfire out of frustration than helm it like a god and with that, I trash and condemn this movie down to the bottomless pits of my arse and shit on it. I am aware that all that sounded a little extreme, but that's how you treat incoherent trash.