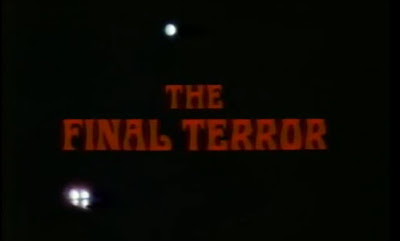 A good way to fully appreciate a backwoods slasher is to look for it's other strengths besides it's location. We all have been treated to summer camps being terrorized by a hunting knife wielding maniac, or campers falling prey to redneck monsters, all in the sense of a survivalist situation, most likely inspired by Deliverance. So what makes The Final Terror a little special? Hard to say, but probably the fact it tries to be Deliverance.

It opens with random shots of nature; trees of every angle, with birds chirping and wildlife doing their wildlifey things, and a couple in a motorbike who later gets killed off by an unseen loonie, one of them through a spring based trap I'm glad to call the rusty can lids of death!

Things continue after the credits with our assorted male victims, a boot camp trouble-makers of a sort, in for an adventure holiday in the woods along with some ladies. The only thing wrong with this picture, other than the fact I just watched grown men sing three blind mice on their way to the woods, is Eggar, who hates them and hated in return, tasked to go along with them since he's the only one authorized to drive their bus. After a prank gone wrong, the group later finds themselves stranded in the woods, with Eggar missing and someone in a camouflage hacking people with a billhook.

There's no denying the fact that it's a cheap slasher flick; there's some problem with the lighting, and the kill effects had their dodgy moments, with only one sex scene, which also doubles as the film's only bloody scene, yet with a good acting cast and set-pieces, Final Terror pulled off some rather distinguishing traits that may not be that much of an impact. Now before you could say this might be just another backwoods slasher, well, you maybe right, but likewise, I do appreciate Final Terror's focus on suspense and atmosphere above gore, spending most of the time in the latter half trying to survive and outsmart the killer, which lead to a rather low bodycount, but entertains nevertheless.You could say the rest of the movie is okay; it got a cool looking killer, even if it took them a while to be shown in action, and boasts some lush cinematography and backwoods settings.

May qualify for average, but if you just had to rent something for a while, this might be a good choice.