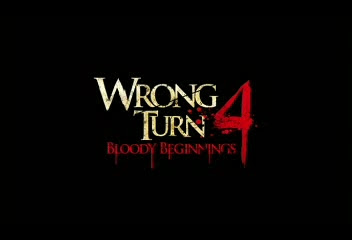 After the odd duck of a sequel Wrong Turn 3 (2009) nearly ruined the whole franchise (at least for me), I was both surprised and glad to see that we're getting this fourth outing as I didn't want this series to end on a very low note. This time, however, it appears we'll be going back all the way to the beginning.

We start the film a few years ago, when the trio of cannibals from the first Wrong Turn movie are just little boys locked up in a sanitarium for being mentally violent and fascinatingly unable to feel pain. The kids soon escape captivity and release the rest of the patients, putting the place in chaos and murderous frenzy. No sane person survived and our three boys simply walked away.

Cut to 2003, following a group of ten college students breaking some ice by snowmobiling through a frozen forest. Just as luck have it though, they got lost after making a few wrong turns and they're soon at the mercy of an upcoming snow storm. Originally heading to a friend's cabin in the mountains, they instead seek refuge inside a nearby abandoned sanitorium, the very same sanitorium where the opening massacre took place. After making themselves comfortable, they crash into a party and do all sorts of random dumb teens stuff until the "owners" come back: the three inbred brothers, now adults, returning from a hunt. To simply put it, the brothers are not happy with the trespassers so they're gonna do what they do best. Kill and eat!

Despite its flaws, Wrong Turn 4 is a lot more decent of a sequel than the last entry; though the crude humor of the first three films is still present, Bloody Beginnings tries its best to keep it as serious as possible and it works at some point, with the cold and dark backdrop of an isolated building helping give off some eerie tone.

It's still a basic hillbilly horror, however, with nothing really new added to the whole trope except it all takes place inside an abandoned medical building during a snow storm, sleaze and strong gore factor shining through. How sleazy? We get a character intro with four teens having sex, two of which are lesbians. How gory? We have a cannibalizing of a still conscious victim, a giant drill kill and a decent looking decapitation. It's not anywhere up the ante as the deaths in Wrong Turn 2 (2007), but it's more believable than the wide arrays of deaths and traps in Part 3.

Hopefully this is the last entry to the Wrong Turn Saga, unless, of course, they go Ray Kroc on us and make "prequel-sequels" that take place in between movies. Not the best entre' but watchable.

Bodycount:
1 male had his neck bitten open and gets a pen to his eye
1 male dragged away, killed
1 male seen being strangled
1 male seen being strangled
1 female electrocuted with electroshock machine
1 female seen dead
1 male torn limbless by barbwires attached to pulleys
1 male found killed
1 male skewered through the head with a barbecue skewer
1 female hanged and garroted with razor wire noose, beheaded
1 male had pieces of his flesh carved off and cannibalized, lung torn out
1 male accidentally knifed to death
1 female drilled through her back
1 female gored with snowmobile tires
1 female seen froze to death
2 females gets a double decapitation after driving through thin wire
Total: 17
Posted by Kaijinu at 3:36 PM