Be Healed and Slay Together: The Healing (2012) 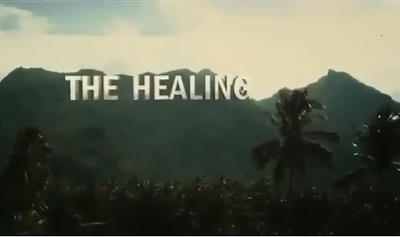 Before I start the review, let me indulge you all with a bit of Filipino culture crash: like some small countries, Philippines has a strong ongoing tradition following folk medicine including psychic or "faith" healing, despite the establishment of more modern and scientific practices. Faith healing thrives commonly around less modernized communities and islands, with many people preferring this over practical treatment due to lack of access, money and/or understanding, as well as desperation should modern medicine fails to give the desired results.

Desperation appears to be the case for our heroine Seth (Vilma Santos) when she brought her father to a faith healer in hopes of curing his stroke. Miraculously, the patriarch regains his strength the following day, much to the delight (and the confusion) of Seth and her friends, family and neighbors. Amazed by the quick recovery, some of these neighbors and friends convince Seth to take them to the faith healer responsible and, much like her father, they are all healed of their respective illnesses some short matter of time after their visit.

All seems okay for a while until those who got cured start to snap one by one, resulting to them committing vile murders before ending themselves. Figuring out that something went wrong with the healing, it is now up to Seth to uncover what happened and put an end to the killings before it is too late.

As such the case of movies like Dead and Buried (1981) and Worry Dolls (2016), labeling The Healing as a slasher movie can be tricky as while it follows the classic set-up of killers methodically hunting down victims, it doesn't have a central villain until the very last act wherein most of the bodycounting were already committed and even by then, the main baddie turns out to be more of a schemer than an actual nutjob with a knife as most slasher films would. There's also the matter that some of the killings lean more on mass slaughter territory than the classic stalk-and-stab act we all know and love and there is a bit of a tone shift around the last act as the film switches from a "death porn" slasher to something much befitting a supernatural thriller as our lead tries her best to prevent a certain evil from fulfilling its desire.

Still, The Healing has plenty to offer to slasher fans everywhere as, at least the way I see it, the film is interestingly structured to be a bodycount anthology of sorts with almost all of the healed characters getting the chance to be the villains and commit gruesomely bloody and gory massacres before they either end themselves or be ended. There's a Final Destination-esque order to those who will turn and their killings are practically decent, which is saying a lot as modern Filipino horror flicks are normally pretty lousy when it comes to the red stuff. Granted some of these killings are still laughable with the dumb CG effects they decided to throw in for reason (some of it for the more "extreme" killings, most for the supernatural elements of the story, but strongly doubt their effectiveness), I can still consider this murder-heavy plotting and the modest attempts for bloodletting as refreshing considering the small number of hack n' slash gore movies Philippines have.

The only true gripe I have with this movie is its uncertain tone; you can tell there is an air of seriousness to the plot since it deals with maniacal murders and traumatic deaths, but there's still a layer of cheese to most of the scares and dialogue and while you could argue this is to even out the serious scenes with some sort of relief, all the hammy lines and acting just look out of place and I honestly think this film could have done better without them, if not at least handle these elements a tad better.

Nevertheless, the acting is okay for most parts, though I can't help but think some of these guys aren't reacting as much as they should do with all of the slayings happening so close around them. There's definitely some budget thrown in for this film's production despite the crappy CG and some late 80s B-grade practical effects, which is pretty standard but not as distracting as most of other Filipino genre flicks. With this, I say The Healing is an okay foreign recommendation for slasher fans who aren't too strict with structure or too critical on production values, as well as those who could appreciate an odd and gory massacre movie.