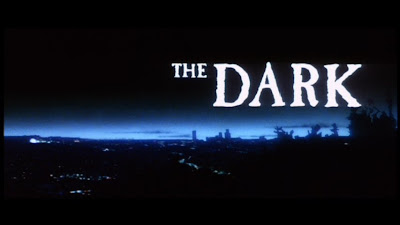 Originally, Tobe Hooper was to direct this feature, which was originally about either a zombie killer or a mongoloid monster, offing people that gets in its way. He was later replaced by Bud Carlos (who directed Kingdom of Spiders (1977) and The Day Time Ended (1979)), for reasons debatable depending on which side of the story you've heard, and after the success of Star Wars, the killer was replaced by an alien that shoots lasers from his eyes.

Curious I was, I tracked this down in hopes of seeing how much of it was left a slasher film, and in retrospect, it kinda did, but the over-all score was too illogical and randomly put together that it falters in and out  from being either B-movie acceptable, or B-movie bad.

A mutilating "serial killer" has been terrorizing the city of Los Angeles at night; his victims, often found with their heads torn off, caught the attention of a reporter and a disgruntled book writer whose daughter by said killer. As they attempt to stop the murders, it is soon revealed that the killer is far from Earth.

Honestly, I never was a big fan of the Star Wars franchise, and now, seeing what it did to a potentially big proto-slasher wherein Hooper was set to direct, I don't think my opinions are gonna change at all. The Dark's messy mish-mash of things from cop thriller, to slasher film stalks and killings, and of course, the humanoid alien monster angle, is evidence enough of the producer's desperate attempt to cash-in to the Sci-fi classic's box office returns, editing the kill scenes where in the killer mutilates its victims, and instead replacing them with said killer shooting lasers out of his eyes.

In a way, I can look pass all the sci-fi bits of this movie, since the build-up pretty much retains the 70s slasher feel, including cliched characters such as a shoot-first-ask-later cop, an avenging book writer whose daughter was killed by the monster, a psychic who develops a link to the monster's rampage, and even the tough female reporter who says she don't need no man looking out for her. Silly as they is, the cast and acting maybe isn't too atrocious. And as I've mentioned earlier, it did well on the stalk and kill department, which are accompanied with a decent score, and a climax that involves a showdown between the monster, a barrage of cops and more cartoon lasers.

This is good and all, but the problem for me here is that the killer looks nothing like an alien; he looks more like a hairy mongoloid with really sharp claws and an animal growl, a funny thing to look at considering the producers "fixed" this by freeze-framing at the monster's eyes and added cartoon lasers shooting out of his eyes. It's a tough ride to go through seeing that the movie's actually leaning more into the "Zombie" angle, and that the rest of the attempted Sci-fi trappings just doesn't fit in.

Not sure where to stand in this; I clearly admire the cheese, but as a movie, it served me no purpose than as an overcooked cash-in, with a serious case of identity disorder. And Pink Eye! I guess I could blame the test audiences for this one: "do sci-fi" they say, and look at what happened. Hardcore B-Movie lovers would find a good viewing in this one, so do those who love a weird flick. Me? I prefer my alien-slashers to be more like Alien (1979), or even Without Warning (1980).