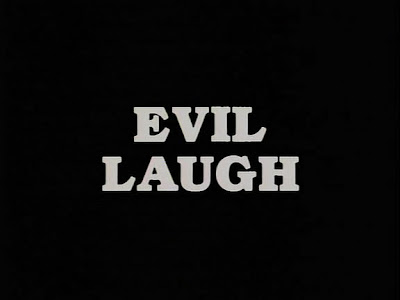 Wow, if this film could get any more "standard", I'll be damned! 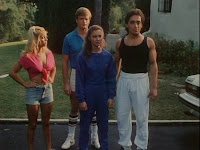 More or less, it's a slasher film about some partying teen interns trying to juggle their work fixing up an old foster home their professor bought and planning to turn into a condo. Stereotyped teens here, slasher tropes there, oddly pointed out by that one nerd who spends his free time reading Fangoria magazines and groping butts (dude butts!) as a prank. (and yet, you could count Evil Laugh as your proto-Scream thanks to this guy)

And then there's the masked killer who giggles and laughs every after kill. Throw in some butterball sheriff and a back story on the house, which involves foster children being set on fire, and you got yourself the whole fondue delight of a horror movie that stands no taller than its brothers. 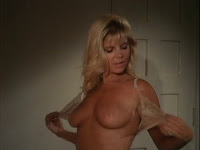 Don't get me wrong, it's terrible, the scripting is written with cheese whiz, atmosphere lacks tension and features one fix'er upper montage that had to be cheesier than the one from Revenge of the Nerds so don't expect some real scares and bits of grey matter. But when I'm looking for a cheap B-flick slasher movie that doesn't take itself too seriously, with a slashing so bloody and a corniness obviously done in purpose under a shoestring budget (it appears that everybody had a good time doing that, too), why not go with the flow and just take it all in?

The acting in the film was fair, editing was well done for a minimal budget, and plot actually went on with a story that developed as the film went on, lingered with additional ironic takes on the cliches and rules set up just for this sub-genre. And best of all, the kills here were really good! More on the likes of Friday the 13th's simple acts of murder, only built stronger thanks to some ironic humor and fair dabs of blood added to it. Of course, it does have its own set of memorable kills, something I rarely seen in an average slasher flick such as this; the early machete disemboweling gave a nice touch as an opening kill and by the time the action finally got going, we even got treated to a de-groining similar to the one from Just Before Dawn and a microwave head bake ala Superstition! 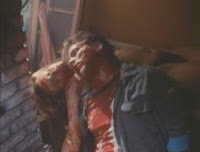 The twist reveal in the end has to be another point up for this title; it makes perfect sense and, for once, we actually have a motive that works with the plot.

Best seen in its true strength, the campiness of the picture that had us placing our tongues firmly in cheek, Evil Laugh is a paint by numbers example of a slasher movie that knows the rules, plays it well and tries the hardest not to be boring. Lacked a few points but it's a worthy addition to any fan's collection or viewing pleasure.

Bodycount:
1 male disemboweled with machete
1 male powerdrilled on the head
1 male found with throat cut
1 male stabbed with knife
1 male beheaded with machete
1 female killed offscreen
1 male gets a  machete through the groin, exits to arse
1 male repeatedly axed on the head
1 female strangled, neck broken
1 male had his head cooked in microwave
1 female shot
1 male killed with scissors
total: 12
Posted by Kaijinu at 11:56 AM