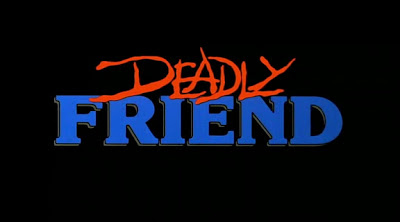 A little off from being a traditional slasher film, but nearly structured as one otherwise, Wes Craven's Deadly Friend is a little cult classic with a fair following due to its would-be campy yet imaginative plot coinciding with a rather offbeat and sometimes warm tone.

A new kid in town, Paul is a super genius specializing in robotics, particularly Artificial Intelligence. He moved to his new home with his single mother and B.B., his bestfriend and crowning achievement of a self-learning A.I. that looks like a cross between Short Circuit's Johnny 5 and the laser shooting Killbots from Chopping Mall. (interestingly both movies were released in 1986. Cash-in?) Paul quickly got the attention of some neighbors thanks to B.B.; some quickly befriends the two, including Sam, an abused yet loving girl and Paul's little love interest, while others, like Sam's own father, a cranky old hermit Elvira, and some neighborhood bullies came to loathe them.

Despite the mixed attentions both he and his robot friend are treated with, Paul maintains a healthy lifestyle with his human friends as well as on his studies on creating A.I's at a local university. But when he lost B.B. during a Halloween prank gone wrong and Samantha was accidentally killed by her own father (disguised as an accident), some time later, Paul decided to play God and merge B.B.'s AI chip with Sam's brain in hopes of reviving her. The plan worked, but not the way he imagined it as a robotic revenant, Sam/B.B. begins to take down those responsible of killing him/her and those too who threatens Paul.

Apparently one of Craven's stranger and obscure entries in 80s horror, Deadly Friend was based on a novel titled Friend which the movie follows for most part and elements, but all in all still ending up as your typical hilariously cheesy, moderately-budgeted horror film that, if you would take a time to notice, also shows some signs of Craven's devolving style in regards in making horror films.

If back then, Craven wanted us to cringe in terror as a trio of thugs gets their comeuppance from a victim's family or when a burnt man hunts you down in a place where you're most vulnerable and helpless, Deadly Friend marks the time he began to create a more commercially acceptable horror film that's toned down in terms of scares and shocks.

The first half of the film was clearly for build; we get to know the main players of this story and some of the turmoils they're going through, may it be as a physical presence such as nasty neighbors and abusive parents, or as an emotional wreckage, as in the death (or deaths) of friends. When Paul finally managed to zombify Sam, the film quickly escalates to a typical revenge-driven slasher film that plays around with some well-deserved kills, with one involving a basketball and an exploding head being this film's biggest (and personally funniest) selling point. This should have been a fine and understandable move, but if we're going to look into at all of this, one would start to see why this film also raised a lot of eye brows.

While the first half already taken out some sense of credibility and realism from the movie (understandable seeing this is a movie about a geeky boy and a robot that he so happens to had build on his own), the second half pushed the envelop further as things begin to look sillier by the minute: Yes, teenagers driving recklessly in a banged-up van can go ride and park around unnoticed, while one of them steals a corpse from a conveniently under-staffed hospital and then easily hide away a rotting, day-old corpse, hardwire it with a chip and remote control it to move around on its own, without anyone noticing the smell and the fact this corpse managed to walk out the next day. I may made it sound atrocious, but thankfully it's a lot more bearable if you take it in a more open manner.

Obviously, the film was made for young, new age horror fans who would like to drive by to the mall just to watch a "scary" picture with a date. The film features a lot of Craven's later signature elements such as a plot revolving around a once humanoid character being resurrected into something otherworldly, as well as the use of dreams (or nightmares) for scares. I do take notice of a lot of Craven's slasher movies would normally revolve around teenagers with parental problems as well. A Nightmare on Elm Street had parents hiding a fatal secret from their kids, Shocker and (the atrocious) My Soul to Take have leads who's fathers were really killers; in here, Craven took another stab on the whole bad parent approach, but the focus on it was more as an ignition point than a driving element that going along the movie, since bad daddy here was hardly as evil as some other bad daddies from other horror films would be since all he did here was look crazy and shout at his daughter, along with a wrist wrestle or two. His death ironically justifies his existence, however, as a newly revived Sam finally puts the beg into her father.

Kills in Deadly Friend were very few since it did more favor over the story. As I mentioned above, the only worthy murder here is the now online-famous basketball decapitation, done away in the most basic and the most splattery blood effects this film can afford. Another discussion-worthy moment would be the ending, which is by far one of the oddest take on a last jump scare gig, rivaling the unexplained "corpse coming to life to de-groin a guy" ending of the cheese-filled slasher Pieces (1981). Spoiling said ending (skip this part if you don't want to know yet), we suddenly have a humanized version of BB coming out of Sam's corpse when Paul tries to steal it back again, grabbing the geek by the neck and seemingly killing him. You would expect a logical explanation here, like a dream maybe, but with all things logical thrown out of the window, I guess the producers thought it would be just as accepting to do a random scare scene as a fully grown robot coming out of a body to kill off its creator as if its happening in real life. Some people bought it, some didn't. I stood in between and just waited for he cool ending theme this film has!

What makes Deadly Friend an acceptable film, above all its flaws, is that at least it's mindlessly entertaining. A few selective people will try to understand it, but it's really just a movie meant to be enjoyed for its weird campy story reaching out to its teenage audience. Not the best from Craven's end but it is far from horrible either. (I believe My Soul to Take takes home as his worst. Seriously, how did you managed to get that one released, Craven?!)