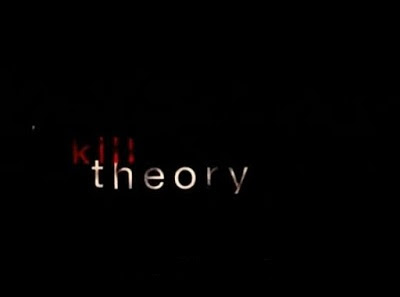 From a first glance, Kill Theory sounds like your typical teen slasher fodder: we got a group of 8 twenty-somethings partying at a secluded lakeside cabin in the woods, only to be attacked by a killer with a rather cool looking hatchet-hunting knife weapon later that night. The catch here is, the killer isn't gonna do all the dirty work as he has a theory that anybody will do unspeakable acts just to save themselves, a belief stemmed from a personal incident which involved him letting some friends die for his own survival. If the teens do not comply, he will kill them as punishment, thus leading to some of these supposedly close-knit friends to go homicidal at one another in the most brutal fashion.

If it's to say anything about the plot, it can be described as what would SAW (2003) or Battle Royale have been if they were moderately budgeted teen slashers. And as many hack'n slash titles out there, Kill Theory is guilty of the very cliches that identifies slashers, such as killing the first ones to be shown sexually active and have the whole massacre happen in a dead zone where the nearest help is a mile away and cellphone signals do not exist. Of course, the little twist on how the massacre will go down did give the movie a little more flavor than the standardized backwoods kill-a-thon, though how well this concept was executed may depend on perspectives.

At first, the characters started barely fleshed out, kinda in lined with the usual two to one dimensional meat victims. The further the story goes however, the more the script tried to develop some sense of depth in them as we soon find out what exactly goes through their heads and how some of their pasts are affecting their situation. Unfortunately, the story just had to use the shallowest (if not overused) of reasons, pretty much the kind of motives one would get from your typical B-grade slasher (one was cheating on their lover, another was teased too much. The basics) so this somewhat made the supposedly intriguing will-they-or-will-they-not? element of the killings a tad challenging to follow as not only it did little to ensure who exactly we are supposed to root for, but it may also did little to ground us into caring for the characters at all.

A slight misstep for a potentially good twist on the slasher formula if I may say so. To be fair, some of the roles were played pretty well as a good bunch of the actors were skilled enough to evoke pity for their characters. It is just that the script could have used some more variety for the the teens' reasons for the killings than, well, a bad break-up or being called fat. If they were a little less banal, maybe they would have made their plight more engaging than what it is now.

While this may lead to some of us not all caring on who lives or dies, Kill Theory at least attempted to give something in return for our patience as the killings come in shockingly and, thankfully, gorily as all means of back stabbing, both figuratively and literally, are ever present. (In full practical and make-up effects no less) As expected for a killer who wanted to be in control, they even have the place rigged with some traps and have them somewhat anticipated the layout and possible decisions the kids may make. How exactly did the killer knew or prepared all of this may raise a few eyebrows during the movie but there is a really decent twist in the end that kinda answers some questions.

I do recall seeing this as early as my college years, which in turn was my "slasher renaissance" as I was re-discovering my love for the slice-and-dice flicks, and I believe I wasn't all that impressed with Kill Theory, nor did I disliked it actually. After a few occasional re-watches throughout the latter years, I finally came up with a conclusion that Kill Theory is just an okay, if not average slasher with an interesting twist on the killing spree. I may sound unimpressed by this but truth be told, whike it may lack the right execution to make it as memorable as it wanted to be, I just have to commend it for trying!

If you want something more twisty and interesting for your slasher crave, I will recommend this tiny gem.

Bodycount:
2 males and 1 female dropped to their deaths
1 female gets a throat cut from a dagger, carved to death
1 male shot on the head with a rifle
1 female drowned
1 male impaled on the eye with a firepoker
1 male had his face pulped with a shovel
1 female strangled
1 male knifed on the gut
Total: 10
Posted by Kaijinu at 9:27 PM