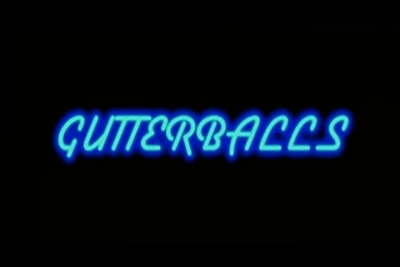 Bearing the 80s vibe of film grain and cheese, Ryan Nicholson's Gutterballs is one title that got real close to my nasty side with its unrestrained vulgarity, profanity and violence, all in the spirit of the old grindhouse exploitation.

Two rivaling bowling teams made up of teens get into a brawl inside a disco-themed bowling alley Xcalibur Bowling Centre one night when a bitter hothead, Steve, wants to get even with his ex-girlfriend Lisa and his former bestbud Jamie, who swept his girl away. The brief fight ends with the janitor threatening them with a shotgun and Steve getting beaten badly and his foot broken. As her gang calls it a night too, Lisa returns inside the alley to retrieve a purse only to find Steve and his friends waiting for her in there, still wanting revenge. Attacked and violently raped in turns before sodomizing her with a bowling pin, Lisa is left on a pool table naked, berated and barely conscious.

As the next night comes, both teams return for a bowling tournament to settle everything, with Lisa surviving the previous night and noticeably acting strange. Not too soon, a bowling bag-masked killer named BBK, armed with sharpened pins and bludgeoning bowling balls, starts to pick off members from both teams one by one, apparently under Lisa's name.

A low-budget cult classic of sorts, Nicholson's Gutterballs is one absurd entry to the rape-revenge/slasher genre that goes through every trope of both horror sub-genres under the originality that is about bowling, a sport imaginatively turned into a literal bloodbath.

The film's approach is clear; as the slasher sub-genre normally relies on killing off unsuspecting teenagers, Gutterballs decide to make this approach more "fun" by taking the lengths to create unlikable characters, both rape-guilty and not, giving them an obscure need for sex or plainly making them jerk-holes who swears a lot and are completely insensitive. This said, sleaze is considerably on a helpful serving from both sides of gender (and one in between), often made clear with sleazy sex scenes and close-ups of both male and female genitalia. With this, the sex-and-death cliche here is "balls-out" as no one is clearly all that innocent and the kills make sure these victims are done away in an ultra violent fashion, often in theme to the sport and/or the sleaze such as death by "69" position, a sharpened pin anal rape, an impromptu 'man-gina', head bashed with bowling balls, and even a head eaten clear off in a nailed ball waxing machine. (The latter being my favorite) No murder is tame and the shock and splatter is really high on its value thanks to killer special effects. (Though some does look absurd, but who's complaining?)

The rape scene is certainly a hardest punch in the gut; not only was the victim assaulted repeatedly by three merciless men but she's also repeatedly beaten, kicked and, as it's finale, got raped with a bowling pin. This scene got a bit of a controversy due to it's lengthy 8 minute run and graphic take, not unlike the "hunt and rape" scenario of the original I Spit on Your Grave. Small mercies was that at least they didn't go as far as using the "other end" of the pin (Those who saw this flick would probably know what I'm talking about) and for those rooting to see these fucks get their just desserts would be glad to know two of them got quite the bad ends.

Some stylish lighting and camera work ala Italian giallo also have Gutterballs pay tribute to other horror styles, though it's not as whacky as the marketing done for this film which had posters of movies like Maniac and Halloween rendered with bowling themes, a witty wink to the influence these two flicks had on this title. Some of these cheeky market work even found its way into the movie: remember Michael Myers dressing up as a ghost with glasses to prey on an unsuspecting teen? BBK did it with his costume and, what appears to be, a freshly peeled scalp.

Clearly a genre film, Gutterballs' hardcore approach is undoubtedly not a taste anyone will welcome. There will be some peeps who will mind the obnoxious cast or the homophobic and misogynistic undertones, not to mention the weak script and lagged pacing in some parts of the film. Neverthless, I'll assure you that if you're the kind of guy or gal who likes their horror flicks fun, simple, and relatively bloody beyond recognition without minding much of the small stuff (or big stuff, wherever you boat floats), Gutterballs may satisfy.

Bodycount:
1 male and 1 female smothered to death in each other's genitalia while in tryst
1 male gets a bowling pin shoved down his throat
1 male gets a sharpened bowling pin stabbed to the eyes
1 female garroted with shoelaces
1 female had her head bashed open with bowling balls
1 male had his head shredded inside a nailed ball waxing machine
1 male found beheaded
1 male anally raped with sharpened bowling pin, head beaten repeatedly
1 male gets his neck slashed with switchblade
1 male had head blown off with shotgun
1 female shot on the gut with shotgun
1 male shot with shotgun offscreen
Total: 13
Posted by Kaijinu at 9:37 PM