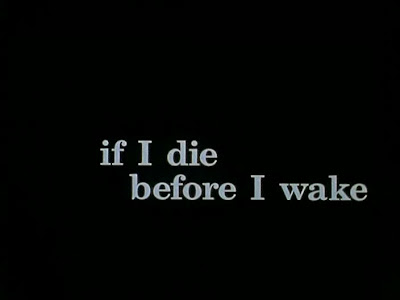 A little known home invasion thriller, If I Die tells the story of one random night a family was plunged into a nightmare that seems to have no end; out of the blue, three masked men broke into their wood-secluded home, thrashing everything and holding them hostage. The family's two daughters managed to evade them but when the younger of the two got caught eventually, the eldest have no choice but to try surviving the night and fend off the intruders, relying nothing more than her wit, strength and pure luck.

Just when you thought home invasions couldn't get any scarier , If I Die practices expressive grittiness and high tension thrills, keeping the exploitative parts as minimum as possible. The film notably skips what most hostage movies would do and went straight to our jugular as the home invasion quickly began even before we could get to know who the unfortunate family was. I believe this is to give us a bit of in-depth experience of an actual home invasion through our lead character Loribeth (played Stephanie Jones). We identify with her plight and the family we're seeing would might as well be our own, thus inducing us to feel every inch of tension our heroine is experiencing.

While the plot seems to sound like a low-budget exploitation survival flick, the film is anything but; there are a lot of offensive elements here such as rape (both hetero and homosexual) and traumatic deaths of loved ones, though not overly graphic and instead focuses more on depth and psychological impact. One scene, for example, had our thugs watch a home video with the youngest after they had just murdered her father, showing the family's happier times, thus manipulating us to root for our family to give what these guys deserved. This is, at least what I believe, where the negatives of this movie come in.

Perhaps you could blame the fact that I am a fan of The Last House on the Left 2009 redux  but I think these guys got off way too easy; these guys were so heartless that one of them doesn't seem to be bothered that his brother/accomplice might be dead and I really prefer one of them had his hand grind down a kitchen sink while choking on his own blood from a throat cut. But due to the censors, the film couldn't get anywhere as brutal as I wanted it to be, and perhaps it's for the greater good of this film as it did managed to had us focus more on the emotional horrors of the situation rather than exploitative bodily damage.

Stephanie Jones did an awesome performance as a panicking yet rationalizing teenager who's forced to see the traumatic deaths of her family, initially pushing her to try and gain control of the situation. Out of the three thugs here, Mute Watson played the leader Daryl who lack so much personality as typical two-dimensional redneck trash who wants nothing more than to destroy another life, though I can tell Mute managed to bring out some personal touches with his character. There's actually one sympathetic villain on this movie, T.J. (played by Mother's Day (1980)'s Michael McCleery) who seems to be more rationale and is aware that things had gone to proportions more than what they could handle; even though we can't be entirely sure of this character's side, but McCleery's stressed out performance for this character made him more of root-worthy at some point, apparently enough to be repaid in kindness by one of the victims. (A scene very awkward for my part)

It's a very stressful film to watch, I admit, but it's not one that you could look away easily either. While films like Kidnapped (2010) and Inside (2007) puts the blood in bloodbath for home invasion movies, If I Die Before I Wake looked elsewhere and found terror and tension in simplistic visuals. Not everybody's cup of tea but worth a look if you're into innocent families being terrorized.

Bodycount:
1 male had his throat cut with switchblade offscreen
1 male strangled in choke-hold
1 male knifed on the chest
1 male impaled on gate railings
total: 4
Posted by Kaijinu at 10:34 AM