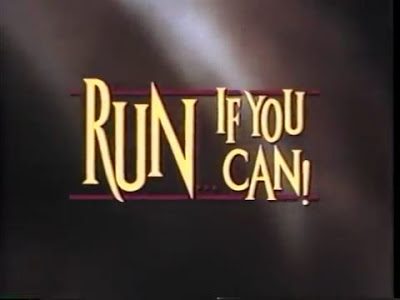 Kim Page is a college student who agreed to house-sit for a family friend who just so happens to be filthy rich and owns an expensive villa. Excited for the stay at first, things suddenly go for the strange and disturbing when the house's satellite TV picks up a broadcast of what seems to be a pornographic snuff film. There is already a string of unsolved murders around town and Kim begins to suspect that this broadcast's somehow connected. By the time the cops are called in and convinced, it might be too late for Kim as someone working on the films is plotting to silence her forever, and too anybody else who gets in the way.

Another rarity of a horror movie, Run is a direct-to-video affair that dabbled in Hitchcockian witness thrillers with a slasher-inspired final act. It's generally sleazy thanks to the softcore porn-esque nature of the plot (though nothing that graphic, may it be the sex or the actual killings), sharing it a semi-predictable mystery of who's behind the snuff operation and too if they will be caught for this.

This said, those looking to try this rarity should wary that this isn't your typical bodycounter as it resembles more of your old school 80s TV thrillers with an added bonus of boobies; the pacing is a real slow-burner and some cheese were slightly smothered over the plot and performances but, overall, it is entertaining in its simplicity, workable stalking scenes, intriguing whodunit, and some great B-grade material such as Martin Landau and Jerry Van Dyke as a pair of friendly-rivaling detectives who decided to look into Kim's case for a possible lead.

Nothing too great but Run is a fun watch for what it is, a simple horror thriller long overshadowed by bloodier and trashier titles of its time. If you do get the chance to see it, don't expect too much and you might just do okay with this obscurity.