The Beast of Family Burden: Revenge of Billy The Kid (1992) 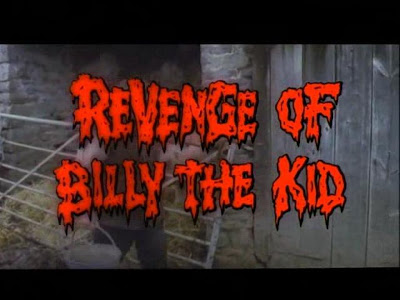 All the way from Britain comes a bizarro-horror comedy that's bound to upset yer lunches and change your views on simple farm life forever! 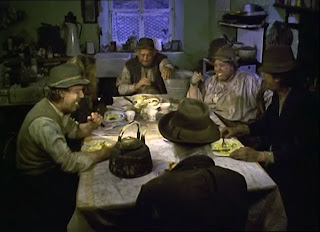 Out on a small island lives the MacDonalds, a backwoods, fart-sniffing corn-polk family of six -no,wait- five, consisting of a lard dad, an even larder mum, their two moronic sons and their surprisingly clean and beautiful daughter. (I would have included grandad but he dies five minutes or less into the movie)

The film starts off with the family and their everyday lives, which consists of dumping dead family relatives into dunghills, hunting, cooking and, well, giving each other bucket baths in the living room. All this would soon leads to ole Pappy MacDonald, either drunken or just plain dumb, spotting a fancy on their goat and have sex with it. (No worries, PETA, they didn't show it) Not for long, and in an odd sense of nature, the goat gave birth to a man-kid with a taste for flesh. 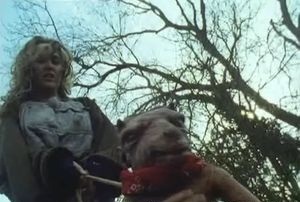 Rejected by most of the MacDonalds, the man-goat finds comfort from the family's sympathetic daughter who tends to it and named it "Billy". But after ole Pappy tries to kill it for eating some of their live stocks, Billy grew up a savage monster and vows revenge to the MacDonald family and anyone who gets in the way.

Think of it as a family comedy that isn't for the family, Revenge of Billy the Kid holds to shame on tackling some of the more suggestive and upsetting matters that only the likes of a Troma film would have in full force.

The first half focuses on what all these bumpkins would do all day long, which is mostly being slobs portrayed in the most God-awful cartoonish display complete with a sitcom-esque situation where one member's too good, smart and clean to be a part of the clan. By the time the second half comes, wherein the mutant monster was born, this was when the story finally kicks in from cheesy comedy to cheesy horror, with the monster being tormented just like his "sister" (technically) and was nearly killed when his father drove him off a cliff, which in turn sets a ticking time bomb to the blood-soaked finale that had every MacDonald, including the would be heroine, falls prey to the terrorizing Billy The Kid. 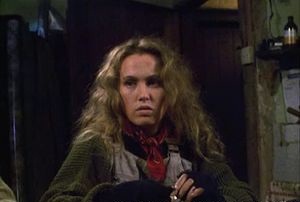 What I like about this film, other than the kills, was it's bad cheese taste that worked well to its bizzare horror-comedy nature; though there is a sense of social-commentary someplace, it didn't try to hide the fact that it's a silly movie with a bit of dread and guts, bringing forth laughter and blood just when one (or both) are called for, going as far as even nodding and winking to other horror flicks such as, a part of the film's sub-plot of a forbidden romance, the heroine's lover arms himself with weapons in a familiar manner of a certain chainsaw wielding Ash of the Evil Dead series, or even the Lawnmower-antics of Lionel from Dead Alive. 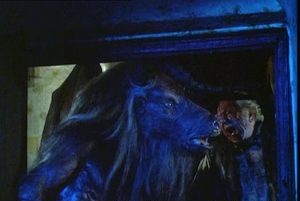 Gore in here is cheap but the kill scenes are an interesting and refreshing bunch since the build-up actually calls forth to us root for the clan being slaughtered. (Though it still makes me wonder why a monster, who's part herbivore, has an insatiable appetite for flesh) The good part of it was that, despite having a monster as an antagonist, the kills didn't limit itself to just plain maulings which was a lot during the early live stock rampages, later having Billy utilize some of the farm tools as well. There's some restraint all through out as some of the killings had underwent some cut-aways which is the only real flaw for me as I was really expecting more.

Nonetheless, Revenge of Billy The Kid is an fine example of a bad taste cinema that will delight fans of the weird and the, uh, not-so-wonderful; fart jokes, inbreeding, cusses and plain awful gore, the film sets the sights of an obscure cheese flick that fits perfectly as a B-Movie cult. Hard to understand how a film this gruesomely funny movie gets overlooked but those lucky enough to glimpse a copy of it shouldn't hesitate to see it.